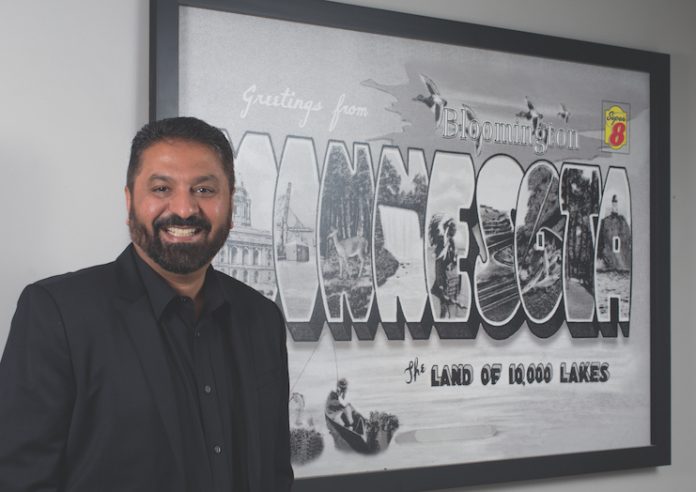 For more than 30 years, Shawn Punjwani has been a successful businessperson in the Minneapolis area. However, regardless of how well his ventures were performing, they were unable to scratch a particular itch—the itch to become a hotelier. “It has always been my dream to own a hotel, and for more than a decade I was looking for the right property to invest in,” he says.

In 2014, he got a call from his broker letting him know that the Super 8 by Wyndham Bloomington/Airport—which happened to be right across the street from his office—was up for sale. He jumped at the opportunity. “At first I was a little hesitant about owning a hotel in the economy sector,” he says. “But when I ran the numbers it made sense. I also did a bit of research into the Super 8 brand and was heartened by how much loyalty it inspires in guests. That really made me feel good about the decision to purchase the property.”

The hotel needed renovations, which could have been daunting for a new hotelier. However, the timing of investment was also around when Super 8 launched Innov8te, giving Punjwani guidance during the process. Since Punjwani updated his hotel, he’s seen rates skyrocket. “When I took over the property, I came up with a seven-year plan, including projected rates. Now, four years later, my rates are way above what I projected for the entire seven years! I don’t see any sort of rate ceiling for this hotel, and I think in the next few years, especially as the cycle ends, we’re going to be a serious competitor for midscale properties,” Punjwani explains.

He’s also seen a marked difference in how guests experience the property, especially since implementing the Innov8te design features, such as the city-specific artwork. “We have people taking photos in front of the giant picture in our lobby that says ‘Welcome to Bloomington, Minnesota!’, which is amazing.”

Like most hoteliers, one hotel isn’t enough, so now Punjwani is looking for other development opportunities—especially ones that would be a fit for the Super 8 brand. “I really appreciate the support that this brand’s leadership team provides. It goes a long way,” he says. Punjwani adds that personal touch that Mike Mueller has brought to his current role has also influenced his desire to own more Super 8 hotels. “I owned this property for six months before Mike became involved with the brand. During that time, I didn’t interact much with the corporate team. Once Mike came on board, he showed up at my property, out of nowhere, and said, ‘Hey, I’m here for you.’ That means something, and helps my hotel succeed.”