Home Technology A Different Take on the Space Race 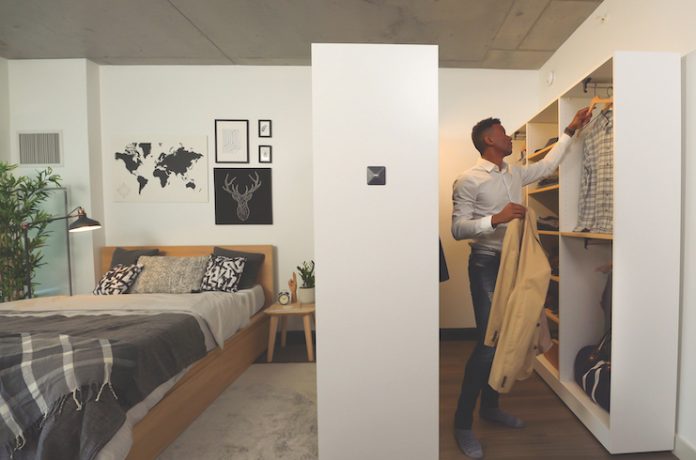 While billionaires Jeff Bezos and Richard Branson take to the skies, Ori co-founder and CEO Hasier Larrea is reinventing how we think about space—that is, square footage and the standard of living we can have within it—right here on Earth.

Describing the genesis of Ori, Larrea says, as a student at the Massachusetts Institute of Technology (MIT), he was part of a group designing cities in the MIT Media Lab to respond to the challenges of urban density. “Through this work, we concluded that the design of the spaces had to be totally reimagined.”

Larrea says Ori’s products are most of all about improving function—an obvious advantage in multi-family residential properties, with similar appeal in the hospitality segment that it resembles most: extended stay. Yet, he says, even traditional hotel rooms, where stays had been extending longer even before the pandemic, are increasingly being used for numerous functions, including work, exercise, and entertaining. “Until recently, a hotel room was typically regarded as a place to crash for a night or two while traveling, conducting business, or attending meetings. Our thought in terms of bringing our technology to hospitality focused on making that space more adaptable to users’ changing needs—which were dramatically demonstrated during the pandemic, when business travelers in particular didn’t have the option of gathering in other ways,” he says.

Larrea agrees that co-working spaces or hotel lobbies have their place, but they are generally not suitable when there is a greater need for privacy or when a video or conference call would disturb others.

Larrea says the problem is the bed, which is the biggest “space killer” in small spaces. The advantage of a bed that can lift and descend from the ceiling in less than a minute with the press of a button, he explains, is that it can easily transform a couch with armrests into a bed with side tables, making it a completely different room use, without the need to be made presentable or folded away. Ori’s answer to the problem of storage space is the Pocket Closet, a luxurious walk-in closet that collapses with the touch of a button when not in use.

Larrea says, like other innovations that sounded like science fiction when they were first introduced, Ori’s products are just another example of technology that has gradually become part of everyday life, like the long-available garage door opener that lifts and drops a massive door throughout the day.

“These solutions are designed to be implemented in two ways. The first way is to take an existing building or property and retrofit it, as we did mine, which is in a 15-year-old building. But where things get even more interesting is when you start designing your spaces around these technologies, because that’s when you can reduce unit sizes without shrinking functionality. So, if you’re underwriting a project, you can fit many more units in a building, which equates to a higher price per square foot.”

Although Larrea demonstrated his Ori Cloud Bed, which he was able to have installed in his own New York City apartment, he says his products are not yet available to the general public for whom making the most of small spaces—especially in cities where the costs are so high—is especially attractive. Ori’s products are already available in more than 50 buildings in more than 25 cities in the United States.