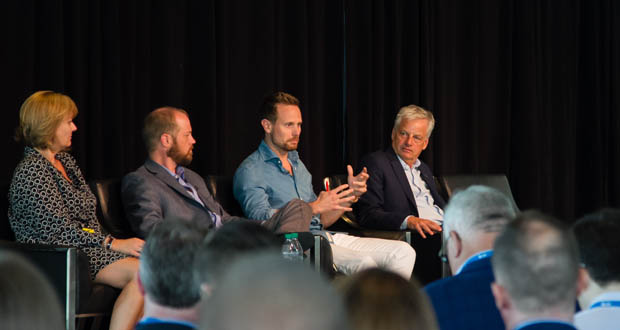 On July 10, approximately 300 revenue managers, owners, operators, and other hotel professionals met at the Newseum in Washington, D.C. for the sixth annual Revenue Strategy Summit. Co-hosted by Duetto, Kalibri Labs, and Silver Hospitality Group, the one-day conference offered attendees a deep dive into revenue management and strategies, pulling in experts from all areas of the industry to discuss everything from new technologies disrupting the hospitality revenue space to the overall financial health of the lodging industry.

Patrick Bosworth, CEO and co-founder of Duetto, said that the conference was created to put a spotlight on revenue strategy and educate the hospitality market as to why it’s so important. He explained that demand is a complicated animal, with many factors influencing its ebbs and flows. “You’re not just receiving this demand. You’re not managing demand that’s coming to you and then designing marketing programs in a vacuum and then having your sales people out there trying to bring in group business or leisure-contracted business or corporate-contracted business. There needs to be an underlying strategy that underpins all of these different functions to be able to drive the most profitable business for hotels,” he described.

The event’s seven panels were augmented with plenty of opportunities for attendees to network with the speakers and one another, allowing them to make new connections that could improve their business and clarify details that may have piqued their interest, such as…

One of the hot topics at this year’s Summit was the new distribution landscape, which includes many more avenues for potential guests to book than ever before. “The occupancy levels that we currently run as an industry are unprecedented,” noted Brian Berry, senior vice president of sales and data analytics for Cvent, a company that provides software for event management, web surveys, and email marketing, during a panel called “Reordering the Hospitality Universe.” “Never in any cycle have we ever achieved the kind of occupancy levels we’re achieving today. Some of it is the revenue management systems and the revenue management capabilities—we have to better manage our group patterns and our blocks—but a lot of it is the distribution landscape. We can simply provide our inventory to a broader set of customers then we’ve ever been able to reach, and that allows hotels to run 80 percent plus on an annual basis. It’s incredible, and it would have been unheard of 10 years ago,” he added.

“Data Is the New Oil”

Data was another common thread at the Revenue Strategy Summit. Many speakers came back to the phrase, “Data is the new oil.” It’s the most valuable resource that hoteliers have at their disposal to create the type of guest experience that drives occupancy and profits, and it’s the key to unlocking a property’s revenue potential. However, hoteliers need to invest in technology to glean useful information from data and make it actionable.

Jos Schaap, CEO of and co-founder of StayNTouch, a company that creates mobile hotel PMS systems, said, “Data speeds up personalization. In order to achieve good personalization, it’s important that there is a lot of data and that there is speed with which that data can be accessed. So you need to have fast computers, and more accessible devices. Computers need to compute lots of data to [help determine] what a guest wants.”

Several panelists also noted that OTAs may be approaching the end of a booming growth period, as they’ve reached a certain level of market penetration. “We’ve seen that the glory days have come and gone for the OTA space,” said Lloyd Walmsley, a research analyst for Deutsche Bank. Walmsley added that there’s still a shift from other channels to OTAs, but most of that can be attributed to the huge amounts of money that OTAs spend on marketing. From his vantage point, though, investors are starting to back off from OTAs because they’ve reached a point of maturation. “It’s a tough space to get data on, in terms of the overall penetration, but when you really strip out group and corporate, the leisure penetration, at least in the United States and Western Europe, is hitting 60 plus percent,” he added.

As the revenue management discipline becomes more prevalent in the hotel industry, another area that concerned many of the panelists was how to best incorporate it into a hotel’s existing procedures and processes. Bonnie Amato, chief revenue officer of Fulcrum Hospitality, strongly recommended training revenue management teams to lead during a panel titled “Revenue Strategy In the Digital Age: It Really Works.” “Make sure you’re training leadership skills in your revenue [team]. In my exposure with the people I’ve worked with, I’ve had people who can think the right way, but they haven’t been able to communicate and lead through the group through the numbers,” she said, adding that giving people who understand revenue management the skills to communicate their knowledge has been extremely effective, in her experience. “I was underestimating their skillset. It was phenomenal to see.”

In the same panel, Andrew Jordan, chief marketing officer of Interstate Hotels & Resorts, noted that revenue management shouldn’t only be left to revenue managers. “Invest in the right people, but break down the silos. At the end of the day, I don’t think it’s a department. I think the GMs are the ones who have to get on board and take some ownership of [revenue strategy],” he said.

Disruption is the Future

As a relatively new discipline in hospitality that relies heavily on technology, revenue management is prime for disruption, a fact that was brought up over and over again throughout the Summit. New technologies, like voice technology, artificial intelligence, and machine learning as well as blockchain, were explored in depth in different panels, but the positive feelings surrounding disruption were perhaps best summarized by Alexander Pyhan, vice president of distribution, OTA, meta, and wholesale at Marriott International. “At the end of the day, a disruptor is really an innovator,” he said.