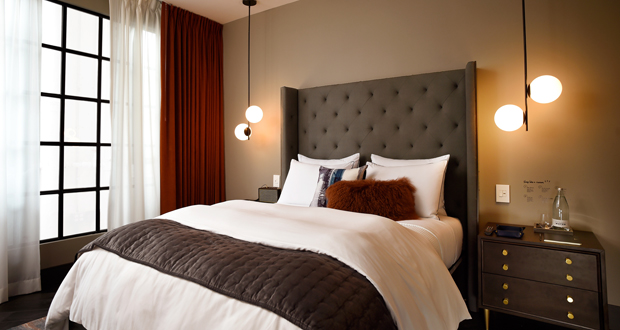 BROOKLYN, N.Y.—West Elm Hotels plans to expand to the West Coast with its new Oakland, California location, expected to open in 2020. West Elm Hotels is teaming up with Signature Development Group and Jordan Real Estate Investments on the project. Signature Development’s extensive experience with residential and commercial projects throughout the Bay Area complement West Elm’s consumer and marketing expertise to bring a new hospitality experience to Oakland’s Uptown neighborhood. The hotel will expand on Signature’s “Hive” project and the surrounding Uptown neighborhood, and will celebrate the rich diversity and history of the location. Oakland is the sixth market West Elm has identified for its hotels venture, in partnership with DDK, following Charlotte, Detroit, Indianapolis, Minneapolis, and Savannah, locations that were announced in September 2016.

“We feel right at home in Oakland, a city undergoing tremendous change and growth,” said Peter Fowler, vice president of West Elm Hospitality. “Its influences are felt in technology companies, a wonderfully diverse maker culture and art scene, and of course, its pioneering food movement. We look forward to working with Signature to create a destination that celebrates the innovations and vibrancy of the city.”

“West Elm was a natural fit for our first hospitality venture because they share our commitment to fostering community and have executed it brilliantly in the retail arena,” said Michael Ghielmetti, president of Signature Development Group. “We are proud to have been a part of the transformation of this neighborhood from underutilized lots to what is now a bustling scene of activity, with local entrepreneurs, artists and chefs, creating a thriving environment for the community. The addition of a West Elm HOTEL will further strengthen the area as an attraction for Oakland residents, Bay Area neighbors, and growing numbers of out of town visitors.”

The property will be located in the heart of the Uptown district of Oakland at 2401 Broadway, on the corner of 24th Street. The mixed-use building will blend a historic facade preserved from a 1910s Beaux Arts structure originally designed by celebrated Bay Area architect Frederick H. Meyer. With Chevrolet’s first West Coast assembly plant nearby, 2401 Broadway was originally an auto retail showroom, at the heart of an area that was later known as “Auto Row.” The history and influence of the car culture will be celebrated in the aesthetic of the new six-floor building housing the hotel, as well as in the design and decor elements of the hotel rooms and common areas.

The 150 guestroom hotel will have ground floor retail space, 4,000 square feet of indoor and outdoor bar areas, indoor and outdoor meeting areas gardens, a lobby cafe with outdoor seating option, and 70 adjacent residential apartments. The building will be adjacent to the Hive, which combines residential and commercial space, including 105 residential apartments, and 100,000 square feet of offices, a beer garden, a coffee shop, an ice cream parlor, and several upscale restaurants.