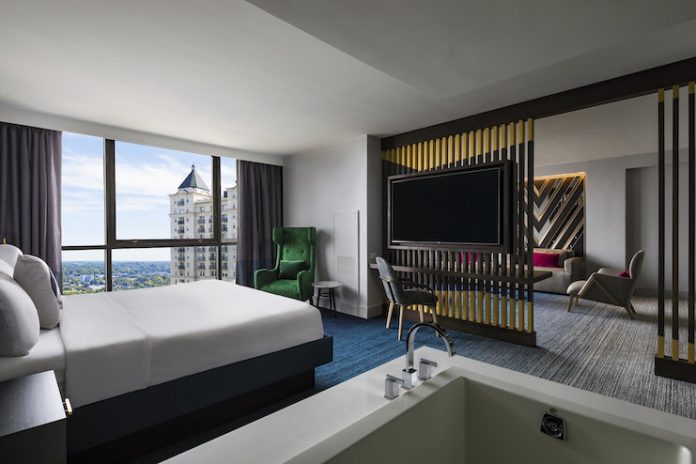 ATLANTA—The Starling officially debuted as the latest evolution of Atlanta’s Hotel Midtown. The rebrand joins the Curio Collection by Hilton, a global portfolio of hotels, each picked for its character and personality. The Starling marks the brand’s second property in the Atlanta area and adds to Hilton’s roster of full-service Atlanta properties.

Formerly known as the W Atlanta Midtown, the hotel’s new identity, under the Curio Collection by Hilton brand, pays homage to its home in “the city in the forest” and takes inspiration from the starling bird that can be found in nearby Piedmont Park. Starlings are a social group of birds often seen in large gatherings in the Georgia sky in coordinated patterns symbolic of the community surrounding the hotel and the individuals who visit. Connecting to the birds, the property’s new identity includes a new rebrand but will be complemented with revamped hotel programming. Additionally, the property will feature updates to both the hotel spa, rebranded as The Spa at The Starling, and the lobby bar, which will re-debut as the hotel’s newest food and beverage concept, Lantana.

Lantana is named after a flower known for its colored blooms, a nod to the lounge and its floral design. The name also speaks to the garden of experiences over cocktails and meals as guests and visitors alike will be able to have all-day service from breakfast to dinner to late-night drinks. Culinary offerings will be led by Executive Chef Cole Pate. Prior to joining The Starling, Pate served as sous chef at the Biltmore Estate in Asheville, North Carolina, and later executive chef of local Atlanta restaurants including The Southern Gentleman and Gyspy Kitchen. Chef Pate will begin to roll out a new menu of dishes for Lantana that include the flavors of Midtown’s culinary scene.

In addition to ample culinary offerings, guests can have a spa treatment of their choice or a full day at The Spa at The Starling. In the coming weeks, the spa will show a variety of packages to celebrate the hotel’s rebrand.

“We are thrilled to unveil our new name and identity,” said The Starling General Manager Kathryn Day. “Atlanta is constantly growing and changing. Likewise, our history is layered and ever-changing. We aim to embody our city’s edge and energy while infusing a bold sense of bespoke consideration to be a home for the larger Atlanta community and the next generation of travelers.”

With the rebrand, The Starling will begin to introduce programs and experiences including “Night Shade Bingo at Lantana” hosted by Drag Performer Taylor Alxndr as well as “Sweat.Swim.Spa” a full-day package with fitness classes by local instructors along with time at both the terrace pool and the spa.

Building on the hotel’s renovation in 2019, the hotel feels right at home with the textured elements that make The Starling an experience. From interior design to the atmosphere, the property has spaces that reflect a welcoming personality. Hotel spaces have floral ceiling prints and framed birds that connect to the city’s parks, gardens, and trails, representing Atlanta as a metropolitan hub intertwined with greenery. Fitting to The Starling’s namesake as a symbol of community, the 466-room property originally built in 1973 also features murals of local cultural figures and musicians.

Midtown is the region’s district central to the city’s dining scene, arts institutions, cultural landscape, and the landmark Piedmont Park. Guests are invited to use the hotel’s on-site dining options or go to Politan Row, the food hall featuring a mix of local food and beverage concepts located next door in Atlanta’s Colony Square. Atlanta locals are also invited to take advantage of the hotel’s various amenities including day passes to the hotel’s terrace pool, signature spa treatments, and weekly live music at Lantana.

The Starling features 433 guestrooms and 33 suites with city views and 45,500 square feet of meeting space, including 9,400 square feet of ballroom space and top-floor event space. Public spaces also offer a terrace pool, a lobby lounge, as well as a spa and fitness center.