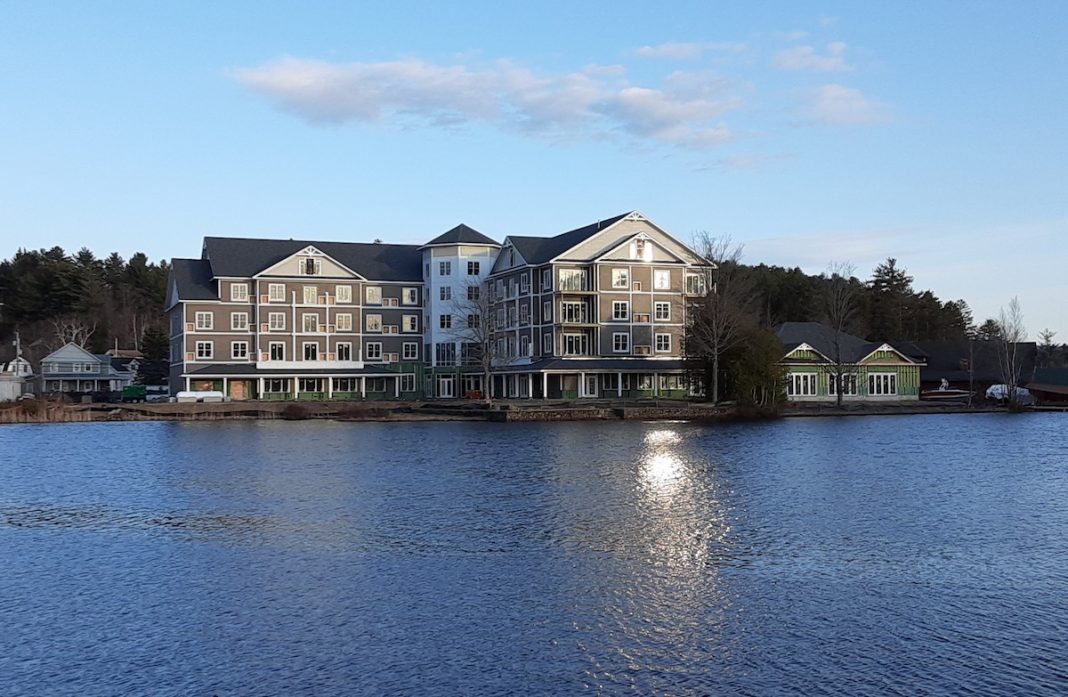 While properties scramble to adapt their existing facilities to meet COVID-19 guidelines related to cleanliness, personal protective equipment (PPE), and social distancing, the good news-bad news story of the soon-to-open Saranac Waterfront Lodge was that being caught in the pandemic mid-construction provided a rare opportunity to change their plans—literally—to accommodate new requirements that promised to impact the hotel industry for months to come.

Lee Pillsbury, who is the managing general partner of Saranac Waterfront Lodge (SWL) and managing director of Thayer Ventures, and Andrew Milne, who is president of SWL and COO of Skyward Hospitality, shared with LODGING the reasoning behind and details of the changes they made, and their hopes for the future of their industry and this luxury resort in the Adirondack Mountains.

Milne says when the Governor of New York shut down businesses in March, construction on the property, which was scheduled to open in July, was 60 percent complete and employed a construction crew of 75-100 people. Ramping back up, he says, required learning about and arranging safe working conditions in terms of cleaning protocols, social distancing, and the use of PPE.

Pillsbury describes the early days of the pandemic as being “an interesting time,” saying, “We were dealing with the same issues faced by cities like New York, but on a construction site in a remote part of the Adirondack Mountains.” The nationwide pause, he says, delayed the work by two-and-a-half to three months and added several hundred thousand dollars, plus the cost of losing a major part of the tourist season, which, for the regional drive-to market, had begun recovering in June.

As Milne recalls, “This was a heartbreaking time in the hospitality and travel industry, but the regional properties in places like the Adirondacks were a bright spot. A lot of families who had been locked up at home for months were eager to boat, hike, and bike, to reconnect with nature and each other away from home.”

Although they were missing out on the opportunity to garner their share of this business, they seized on the chance to modify aspects of construction and furnishing that were likely to be most valuable in the new environment.

Milne says, rethinking food and beverage led to a redesign of the layout and furnishing of the bar, restaurant, and ballroom areas. “To allow for social distancing, we eliminated bar stools, had different table configurations, and provided for more outdoor seating.”

Pillsbury describes the timing as being fortuitous in that it became clear that changes needed to be made and they had time to make them. “We were just about to order all the bar furniture in normal designs, but as this unfolded, we were able to say, ‘We’re going to be living with this for quite a period of time, so let’s rethink how we are going to operate.’ We knew we could always add more tables and chairs and reconfigure things later, but saw the benefit of creating an attractive flexible environment using an overflow design, and foregoing typical ballroom furniture—60-inch round tables and stacking banquet chairs—in favor of restaurant-style tables and chairs throughout.” Using this design, says Milne, the restaurant, ballroom, and pub are all contiguous, flowing from one to the other, but they can still be closed off.

Both Milne and Pillsbury look forward to their upcoming opening, understanding that they are lucky to be in one of the few hot spots in the hotel market, and hopeful that they will be able to help those who are not so fortunate.

Pillsbury points out a concern they expected to have but will likely not encounter due to the current reality. “Normally we’d be very concerned about labor—particularly trained and skilled culinary and service personnel. Not everyone wants to come to a remote area like this, but sad to say, there are a lot of industry professionals who are between assignments.” For those who might be interested in coming up to help them open up the hotel on a task-force basis for two to three months, he says, they can offer first-class accommodations—the hotel rooms during the offseason—as well as training and a paycheck.

Milne and Pillsbury say their own experience during the constantly changing pandemic environment taught them the importance of being flexible. Pillsbury notes, too, the importance of optimism and taking a long view. Although he has faith in the future, he acknowledges that the road ahead is likely to be difficult for many, and urges those who can to help those who are suffering now.

“My heart goes out to the hundreds of thousands of people who have lost their jobs and businesses. I think we all have to work hard to support each other through this—whether that’s helping people find jobs through networking or helping families in need through philanthropy and charity.”

STR: U.S. Hotel Construction Declines but Planning Activity is Up