Home People Super Model: Michael Porter of Motel 6 on the Rewards of Accountability 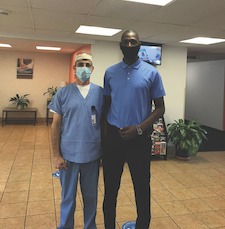 It’s hard to believe Michael Porter was once homeless and discouraged. However, the general manager of the Motel 6 in St. Paul, Minn., has found a real home in the hotel industry since joining less than two years ago. This AHLA Star of the Industry, who was named General Manager of the Year (Small Property), shared with LODGING how he seized the opportunity to change his life and inspire others to do the same, becoming a role model, mentor, and coach for the people who work for him.

Porter’s first small step out of homelessness began with a position as a donation attendant at Goodwill when he moved to St. Paul nearly four years ago. “I was so happy and excited. I wanted to do everything right, be the most positive human being that I could be.”

Gaining confidence from the positive energy he generated at Goodwill, he moved to other positions on the periphery of the hospitality industry—first Cups Grocery Store, then Speedway, where he recognized an opportunity to make a difference in the neighborhood and his own life. “I’d arrive early to pick up trash and beer bottles around the property. I just was consistent and was respecting myself because I felt like I was cleaning up my house.” And, he says, “People started noticing.”

It was this sense of pride in his work environment that caught the attention of a Motel 6 manager, who offered him his first hotel industry job. Porter says he hesitated to accept, afraid to go into a new industry, but the manager insisted, saying. “I love what you’re doing in those stores, just keep doing what you’re doing and we’ll guide you through our system.”

Porter says, much like at Speedway, people noticed the positive change he was making at Motel 6, both on the outside and inside. “I would try to get people, including guests, to be accountable for their actions, to behave respectfully at the property,” he says.

Porter believes it’s the responsibility of the general manager to lead by example and treat employees well. He understands that not all employees want the same thing out of their jobs, so he asks them point blank, “Are you here for a job or are you here for a career? Because I have both of them for you. If you’re here for a job, we’ll set you up on a schedule to get exactly what you want. But if you’re here for a career, we have so much to offer, so much room for people to grow.”

Regardless of his employees’ ambitions, he expects the positive attitude and accountability he models and demands of himself. “If they can’t take the kind of responsibility I expect, I won’t try to hold onto them.” He calls the people who emulate the property’s desired culture “keepers,” saying, “These are the people that you want around, the ones that help build the brand.” He says it’s important to reward them not just financially, but also with praise and encouragement.

Since his coming to Motel 6, Porter’s property significantly increased its cleanliness and guest satisfaction scores. He has even been visited by managers of nearby full-service hotels, wondering what he was doing to take some of their business away. His response? “We want them to know that we lead the pack because we’re working actively to build our brand,” he says. “There’s nothing better than being in this position that we are in.”

Stepping Up in Hard Times

Motel 6 St. Paul General Manager Michael Porter says in addition to the hardships of the pandemic, his community was also devastated in the wake of George Floyd’s killing when protests broke out in the Minneapolis-St. Paul area.

Remembering the human suffering that followed Hurricane Katrina in his home state of Mississippi in 2005, Porter sprang into action, stocking up on water, food, cleaning supplies, and other essentials to care for the community—including protestors—during this difficult time. “We had to stay focused because we needed to consider our own safety while reaching out to the community.”

Porter’s advice to others going through difficult times is much like that he lives by on a daily basis: “Stay focused. Stay positive. Show respect and demand it of others.” In the situation above, this enabled his property to make a positive difference, which he says also provided the opportunity to influence the perception of the brand.

As for the specific steps to take in times of crisis, he says: