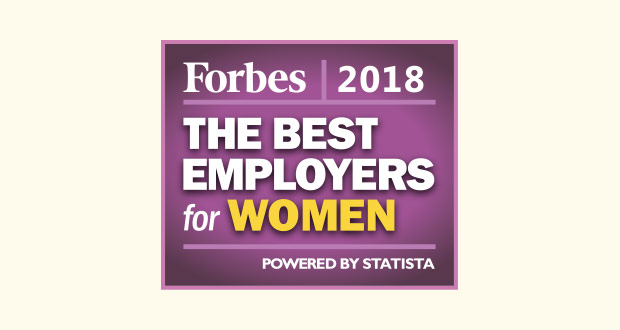 This week, six hotel companies were named among Forbes’ Best Employers for Women 2018. Forbes, in partnership with the research firm Statista, compiled the annual list by independently surveying more than 40,000 employees, including more than 25,000 women, working for companies employing at least 1,000 people within the United States and representing all industry sectors. The employees who completed the Forbes survey were contacted online and asked to provide anonymous feedback—employers did not play a role in the selection of participants. The 300 companies that received the highest total scores were recognized as The Best Employers for Women 2018.

The survey measured participants’ feelings about their employers in a variety of categories. Women were asked to rate their own employers regarding parental leave, family support, flexibility, discrimination, representation, and career. Additionally, participants were given the chance to evaluate other employers in their respective industries. The survey also evaluated companies based on diversity among top executives.

Marriott International came in 124th among the best employers for women. With more than 100,000 employees, the company has also made Forbes’ lists for Innovative Companies (#21), America’s Best Employers (#216), and Best Employers for Diversity (#117).

Hard Rock International came in at #177 on Forbes‘ Best Employers for Women 2018 list. Hard Rock is one of two Native American-owned enterprises on the 2018 Forbes list. The company was also #171 on the America’s Best Employers list in 2017.

Editor’s note: LODGING previously reported that five hospitality companies made Forbes’ 2018 Best Employers for Women list. Six hotel companies made this year’s list, and the article has been updated with this information.