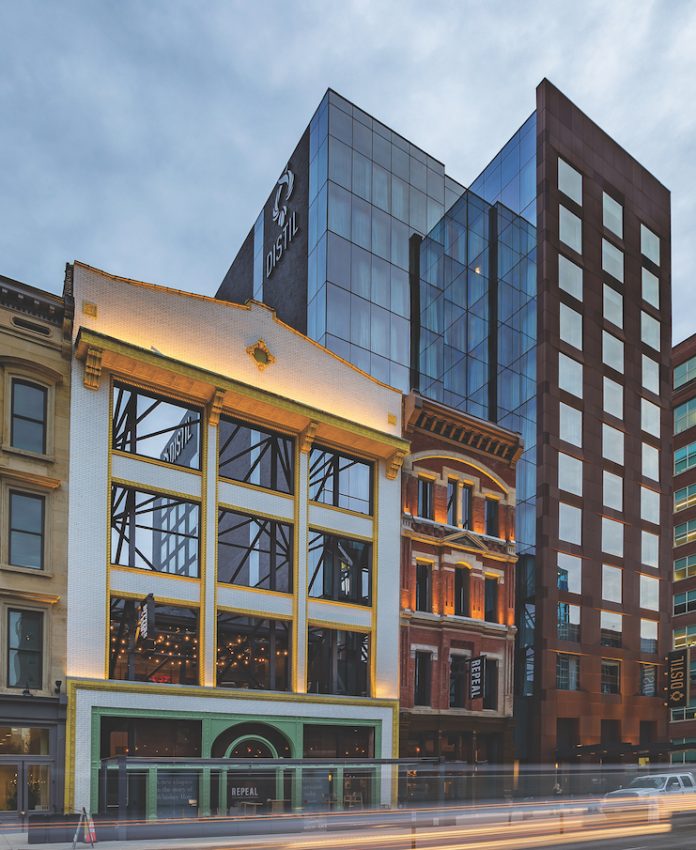 Whiskey Row in Louisville, Ky., was once known as the home of the bourbon industry. Now on the list of Louisville’s “Most Endangered Historic Locations,” Whiskey Row houses Kentucky’s first Hotel Distil. An Autograph Collection property, Hotel Distil bridges Whiskey Row’s historic past and the modernized hotel experiences that today’s travelers expect.

The 205-room boutique hotel incorporates the building’s original façade from the 1860s, which was saved from a 2015 fire. Interiorly, Hotel Distil subtly nods to the building’s start as a bourbon barrel house. Design elements are inspired by the distilling process, including wooden tones, staves, black metal, and copper fixtures.

Hotel Distil invites guests to participate in a celebration of the repeal of Prohibition every night with a commemorative toast at 19:33 Universal Time, which is the time Prohibition was repealed. During the toast, guests celebrate with a whiskey cocktail as a tribute to the repeal and to Whiskey Row.

Hotel Distil has a 5,000-square-foot grand ballroom that can accommodate up to 500 people, meeting rooms that support breakout sessions and presentations, and an outdoor rooftop terrace.

Close to Nature: The Starling Lounge