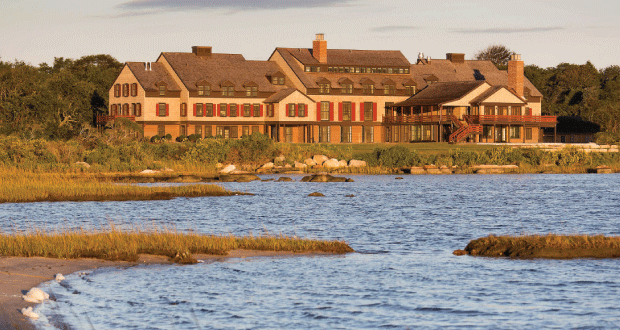 It’s only days away from Fourth of July weekend, and the five-star Ocean House resort in the Watch Hill neighborhood of Westerly, R.I., is preparing to host a classic New England lobster boil on its 650-foot private beach. Daniel Hostettler, president and managing director of Ocean House Management (OHM), is expecting the beach ball—which culminates with a fireworks display over the ocean—to draw a record 600 attendees. “This year, we seem to be the most popular place in town,” he says.

The party has since gone off with a bang, but this is just one of the many ways the ultra-luxury Ocean House highlights its coastal location, culinary talents, and cultural heritage while making lasting memories for guests with high expectations. The same sense-of-place philosophy holds true at OHM’s other luxury properties: the Watch Hill Inn, an enclave of 20 villas just steps from the resort; and the Weekapaug Inn, a laidback retreat on Quonochontaug Pond, only five miles away.

New to the collection is OHM’s first luxury hotel outside of Rhode Island, the Spicer Mansion. Situated just over the border in Mystic, Conn., the restored ship captain’s mansion, which made its debut in May, offers eight rooms, a fine dining restaurant, and a speakeasy-style cocktail bar. “Having multiple properties at different price tiers with different amenities, all within driving distance of one another, really allows us to capture a broader slice of that luxury market,” Hostettler says.

OHM differs from other management companies in that it focuses on branding and marketing each individual property rather than its own brand name. While each property evokes a different personality, OHM leverages proximity to achieve synergies between the locations. For instance, a guest of the Weekapaug Inn would have access to all of the amenities afforded to Ocean House guests, such as use of the spa or a complimentary spin in one of the resort’s Mercedes-Benz convertibles. “We’ve found that leveraging the back-of-house infrastructure of a single flagship property, in small regional areas, is a good business model,” Hostettler says.

Looking ahead, OHM is focused on slow, measured growth within New England. While the company is open to ground-up development, redevelopment of existing structures, and repositioning and rebranding projects, it is highly selective in evaluating new opportunities. OHM seeks projects with premier locations sought out by its specific guest demographics. “We choose our properties and our partners very carefully,” Hostettler says. The company is in the process of signing a final contract for a property in Washington, Conn., which is about two hours from the Ocean House. The 70-room, new-build hotel will be situated on 30 acres, and could potentially serve as an anchor for other hotels in the same vicinity, Hostettler says.

In addition to creating synergies within its portfolio, personalization is a key ingredient in the OHM formula. The company has a team of employees who research and contact every guest to find out important trip details, such as why they’re visiting the area, what they hope to do during their stay, or whether they are celebrating a special occasion. “Luxury today is different for every guest. They are all looking for something different; it’s no longer just the amenities of the hotel,” Hostettler explains. “The best hotels are trying to find out more about their guests on an individual basis and then making sure that information is translated to the operating team, so everyone can participate in achieving the guest’s goal for luxury.”

To successfully deliver those personalized guest experiences, OHM must have the right team members in place. “A hotel at any price range can hire the right people and instill a culture of service,” he says. “We hire for personality and we train for skill, because we believe it’s all about the human resource element. We can teach anyone to wait a table, but we cannot teach you to be happy and customer service-oriented. That has to come naturally.”

The company often looks to its existing workforce when filling new positions. At the Spicer House, for example, the innkeeper most recently served as the assistant director of housekeeping at the Ocean House, the executive chef moved over from the Weekapaug Inn, and the food and beverage manager previously managed Ocean House’s fine dining restaurant. When promoting from within, the shake out period for any new property is substantially shorter, Hostettler explains. OHM is already targeting existing employees for new positions at the Washington hotel, which is slated to open in December 2018. “It always makes an opening easier when you’re promoting the management team from within and they are already aligned with the culture of the organization and the level of service that you expect to be delivered at the properties,” Hostettler says.

During staff orientation, Hostettler teaches OHM employees about empowerment. So long as they have the financial health of the company at mind, employees have the freedom to do whatever it takes to ensure a guest leaves the property happy, Hostettler says. “That certainly has a high cost up front, but it has a phenomenal pay back in the repeat guest level and the lifetime value those repeat guests bring to the company.”

Establish a vision. “Know what that property is going to be from the very beginning while you’re still in construction, so that every employee you hire has this roadmap to what we want to be when we grow up.”

Assemble the right team. “Ultra-luxury hotels are challenging to operate and to maintain consistency and at the rates we charge to deliver that value to guests, so it really comes down to the team that is delivering that experience every day.”

Choose your partners wisely.
“Make sure that the owner and operator are aligned and have the same goals. Choosing your partners is as important as choosing the people who are going to work at the property.”