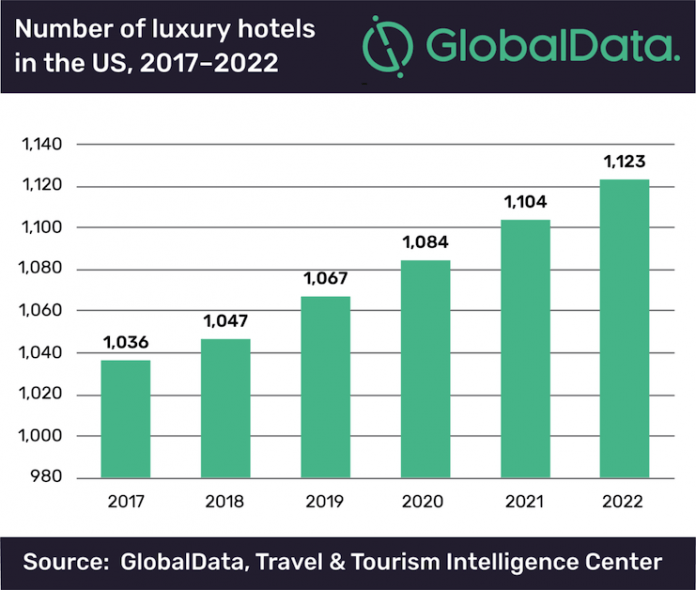 The United States will be home to 1,067 luxury hotels by the end of 2019. This is expected to increase to 1,123 by 2022 at a compound annual growth rate (CAGR) of 1.7 percent, driven by increasing numbers of Chinese tourists, according to data and analytics company GlobalData.

GlobalData’s latest report finds that although this growth is not expansive, it showcases the gradually increasing demand from international and domestic source markets for more luxury offerings within the United States.

Chinese tourists are a high spending source market and their visitation numbers to the U.S. have been growing in recent years. A CAGR of 8.7 percent was recorded in Chinese visitation to the U.S. between 2014 and 2018, and luxury hotels such as Four Seasons state that China is their second-largest source market. Revenue from Chinese travelers has increased steadily for the company, with double-digit growth in revenue in recent years.

“This increase in average expenditure is creating a rising demand for luxury services whilst on vacation, especially in the accommodation sector,” said Ralph Hollister, travel and tourism associate analyst at GlobalData.

Luxury hotels are now being constructed in areas outside of tourist hotspots. For instance, Nobu and the Hoxton will both open their doors in 2019 in Chicago. Both hotels are situated in the meatpacking district, an industrial area that is undergoing a rapid transformation.

“Hotels opening in up-and-coming areas away from city centers will help to reduce the effects of overtourism and are more socially sustainable,” Hollister added. “The meatpacking district is known for independent eateries and shops, so money spent there will stay in the local economy and won’t be leaked out of the area via multi-national corporations.”

An increasing number of downtown areas in U.S. cities are being revitalized to increase capacity, attract higher spending market segments, attract further investment in the city, and improve the overall brand image of the destination. For example, developers have added restaurants, breweries, and distilleries to Industrial Way in Buellton, Calif., an area that previously housed a collection of warehouses and light manufacturing buildings.

“Luxury hotels opening in once industrial or downtown areas within large cities will be a continuing trend,” Hollister said. “Luxury consumers are moving away from standardization as the millennial market grows in size. Old industrial and downtown areas within cities often provide a vibrant mix of architecture, culture and are often non-commercial. This gives these areas an alternative image, which attracts younger market segments.”