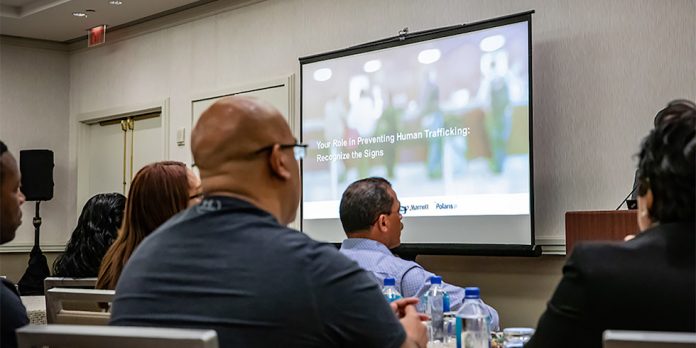 As of this month, Marriott International has trained 500,000 hotel workers to spot the signs of human trafficking in its hotels and how to respond if they do.

“Human trafficking is a horrific form of modern slavery that entraps millions of people around the world,” said Arne Sorenson, president and CEO of Marriott International. “By educating and empowering our global workforce to say something if they see something, we are not just standing up for the most vulnerable in society, we are also protecting associates and guests as well as living up to a core company value—serving our world.”

Marriott launched its mandatory human trafficking awareness training program for on-property staff in both managed and franchised properties in January 2017 as part of its Serve 360 platform.

“Hotels can, unfortunately, be unwilling venues for this unconscionable crime—and as a global hotel company that cares about human rights, we’re proud to be training hotel workers across the Marriott system to spot the signs,” said Dr. David Rodriguez, chief global human resources officer, Marriott International. “There is no easy fix, but combatting modern-day slavery starts with awareness—and we now have a significant number of people capable of recognizing suspicious behavior and reporting it to management and, in some cases, law enforcement.”

To develop and test its human trafficking awareness training program, Marriott spent nearly a year collaborating with ECPAT-USA and Polaris—two leading non-profits that specialize in combatting human trafficking. The company arranged for the program to be translated from English into 16 additional languages and also made sure it could be taken either online or in a classroom setting, so it can be accessed and understood in the 130 countries and territories where Marriott operates. The instruction is also broken down by role because the signs that a front desk clerk sees may differ from those that a housekeeper or bartender sees.

Examples of the visible and hidden warning signs that Marriott shares with its hotel staff include: minimal luggage and clothing; multiple men seen being escorted one at a time to a guestroom; individuals who can’t speak freely or seem disoriented; and guests who insist on little or no housekeeping.

“Hotel workers wouldn’t necessarily see a human trafficker visibly restraining a victim; they would typically see a scenario that is much more nuanced and harder to detect if you don’t know what to look for,” said Rodriguez. “That’s why helping hotel workers identify the signs of sexual exploitation and forced labor is so important. This knowledge gives them confidence that they can do something to help, which is already having an important impact in our hotels.”

Through Marriott’s training, hotel workers learn to observe and take notes about what they remember and then report their suspicions to a manager, who may then contact law enforcement. For their part, law enforcement officials say that this training helps enhance security in their community because greater awareness can lead to greater responsiveness both inside and outside of a hotel’s walls.

The training is having an impact far beyond Marriott International’s workforce. The company donated the training to academia and to the industry through the American Hotel & Lodging Association Education Foundation (AHLEF), where the proceeds of the training bought by other lodging operators go back to support ECPAT-USA and Polaris.

Hotel guests also can learn the signs. Guests who suspect trafficking or abuse should not confront the child or adult but should alert hotel management or security, dial 911 or their local emergency number for emergency situations. In the U.S., they can contact the National Human Trafficking Hotline at 1-888-373-7888 or text “BeFree” (233733).