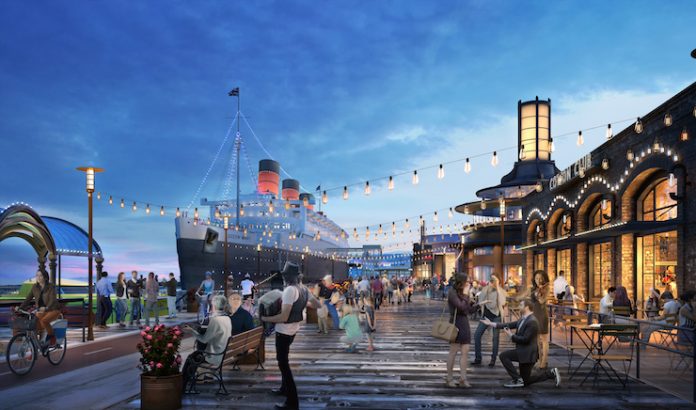 The Queen Mary has had a long and rough history of exposure to the elements—from first setting sail across the Atlantic more than 80 years ago to swaying in more shallow waters during its retirement, which began half a century ago when the vessel was first docked in Long Beach, California. The ocean-liner-turned-hotel has undergone extensive restoration over the past several years and is now at the center of a vision for a dockside entertainment complex in the City of Long Beach.

Shaping that future is Urban Commons, a Los Angeles-based real estate investment and development firm that assumed a 66-year master lease for the Queen Mary in April 2016 and now operates the hotel. As John Jenkins, Urban Commons’ vice president of asset management and a former general manager of the ship, tells LODGING, the Queen Mary is a unique property that brings its own challenges when it comes to operations and maintenance. On the flip side, the one-of-a-kind hotel attracts visitors from all over the world who want to experience the iconic and historic ship firsthand.

Since assuming operations, Jenkins says that Urban Commons has been taking steps to stabilize the structural integrity of the Queen Mary and revitalize the property, starting from the exterior and working inwards. “Over the last couple years, we’ve spent about $23 million making improvements to the structure of the ship—making sure that it’s sound and taking care of any immediate issues,” Jenkins says. “Going forward, we will look at the aesthetics.”

Among the renovations of the past two years are improvements to the boiler room that allowed the Queen Mary’s Ghosts & Legends attraction to reopen, roofing and decking repairs to ensure the asset’s longevity and safety, updating the ship’s fire sprinkler system, and removing rust while painting the exterior hull of the ship. Jenkins says Urban Commons plans to upgrade rooms and public spaces in the near future. “It’s an 80-year-old ship—it will decay. We had to put in some measures to keep it from further decay, but also put in some processes to make sure that we keep ongoing maintenance going forward,” Jenkins explains.

In addition to exposure to the elements, the sheer size of the 347-room Queen Mary hotel presents a challenge when it comes to operations and maintenance. “To try to keep up with a million square feet of space is much more difficult than a typical hotel that’s either vertical or horizontal,” Jenkins explains.

Maintaining the property and making strategic investments in its long-term sustainability is just a fraction of Urban Commons’ plans for the Queen Mary. The firm has earmarked the 65 acres of waterfront land surrounding the vessel for an all-inclusive entertainment destination known as Queen Mary Island. “We are envisioning that the Queen Mary will be the epicenter of a large entertainment district that will include an amphitheater, restaurants, lounges, piano bars, some type of music studio,” Jenkins describes.

Urban Commons is currently working with the City of Long Beach to finalize plans for developing the entertainment complex. “The ship is probably one of the most iconic places in the world and to have it in Long Beach has been tremendous,” Jenkins adds. “Everyone—from the Mayor on down to his cabinet and the City Council—wants to see the Queen Mary flourish. We have a great vision for the years to come, and they enjoy that we’re revitalizing that area and the ship itself. I think our background in development and events is a perfect fit for the city in terms of making that happen.”

“I really love the ship wholeheartedly,” Jenkins continues. “As important as it is to Urban Commons, it’s really a part of history. We understand the history of the ship, we really enjoy being a part of that, and we want to make sure that history is there for many generations.”