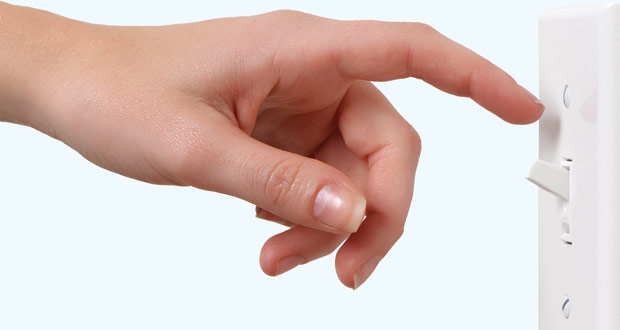 The pace of revenue growth is slowing for the U.S. lodging industry. Per STR, the pace of RevPAR (revenue per available room) increases has decelerated each year from 2014 through 2017. According to the March 2018 edition of Hotel Horizons, the slowdown is forecast to continue through 2020.

In light of diminishing revenue growth, hotel owners and operators have focused on controlling expenses in an effort to maintain gains in profits. One operating expense that has moved in a way that benefits hoteliers is utility costs. Utility costs at U.S. hotels declined in both 2015 and 2016, and at the time this article was prepared, they appear to have been controlled in 2017.

To assess the benefit U.S. hotels have enjoyed from declining utility costs, we analyzed the utility expenditures of 2,334 hotels that submitted detailed cost data each year from 2010 through 2016 to CBRE for the firm’s annual Trends in the Hotel Industry survey.

From 2010 to 2016, the dollars spent by the survey sample to pay their utility bills declined at a compound average annual rate (CAGR) of 0.4 percent. Since utility costs do fluctuate somewhat with business volume, it is informative to evaluate changes on a per-occupied-room (POR) basis as well. When measured on a POR basis, total utility costs at the hotels have declined at a CAGR of 1.7 percent during the same six-year period. 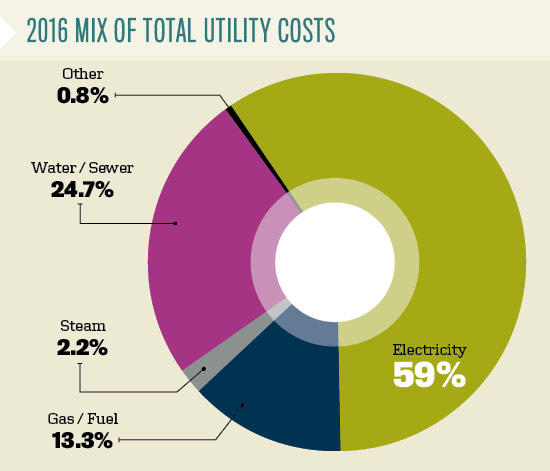 That utility costs are declining on a POR basis implies efficiencies are being achieved by U.S. hotels. Despite a greater number of rooms occupied at the average hotel in the Trends sample, hotels have managed to lower their utility costs.

The declines in utility costs can be attributed to both internal and external factors. The implementation of green and sustainable practices at U.S. hotels, combined with the purchase of energy-efficient equipment and fixtures, has led to less utility consumption. Further, hotels have benefited from a reduction in the cost of energy prices. The Urban Consumer Price Index (UCPI) for Energy declined each year from 2013 through 2016. Over the study period of 2010 through 2016, this index declined at a CAGR of 1.8 percent. 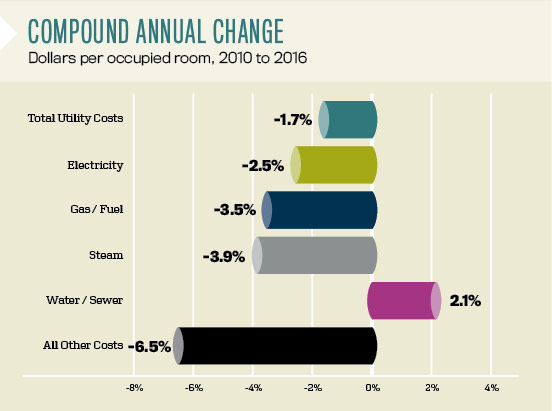 From 2010 to 2016, four of these cost categories declined on a POR basis. The minor categories of “all other costs” (6.5 percent) and steam (3.9 percent) declined the most on a CAGR basis, while the major utilities of electricity (2.5 percent) and gas/fuel (3.5 percent) declined at a slower pace. The one utility expenditure that increased from 2010 to 2016 was water/sewer. This 2.1 percent increase in CAGR muted the benefit U.S. hotels have received from declining energy-related utilities.

Because both consumption and pricing have an influence on utility expenditures, it is valuable to evaluate utility costs by property type and region within the U.S.

Due to their size, the extent of facilities and amenities offered, and their frequent location in areas with extreme climates, resort hotels ($13.70 POR) spent the most on utility costs in 2016. However, because they also achieve the greatest levels of revenue, utility costs averaged just 2.9 percent of total operating revenue at this property type. At the other end of the spectrum, limited-service and extended-stay hotels averaged just $4.20 POR in 2016. With lower revenue levels, utility costs do comprise a relatively large percentage of total revenue (4.4 percent) at these hotels. 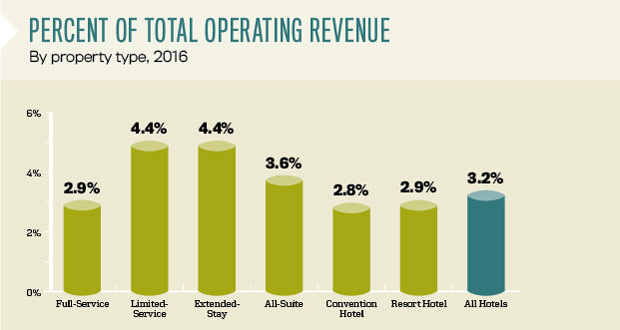 Additionally, sustainability and green practices have risen to the forefront of the consciousness of U.S. hoteliers. Accordingly, multiple committees of the American Hotel & Lodging Association are working on developing the standards for new benchmarks for hotel utilities. Most of the new benchmarks are based on consumption metrics, as opposed to the traditional expenditure ratios. In future editions of the Uniform System of the Lodging Industry, and the benchmarking reports provided by industry researchers, you will see an increasing number of consumption metrics, which will provide additional data for hotel owners and operators to use in an effort to reduce their utility expenditures.

As of the preparation of this article in February 2018, early indications are that U.S. hoteliers struggled to control their utility costs in 2017. During the year, the UCPI for energy rose 8.1 percent, suggesting that hotel owners and operators most likely did not benefit from a reduction in their electricity, gas, fuel, and steam bills during the year. Further, occupancy rates continued to rise in 2017, putting pressure on consumption. Preliminary data suggests that utility costs remained relatively flat in 2017, a remarkable achievement, considering rising prices and volume of business.

To paraphrase Motel 6, U.S. hotels will continue to leave the lights on for their arriving guests. However, they may not be left on too long.

About the Author
Robert Mandelbaum is Director of Research Information Services for CBRE Hotels’ Americas Research.