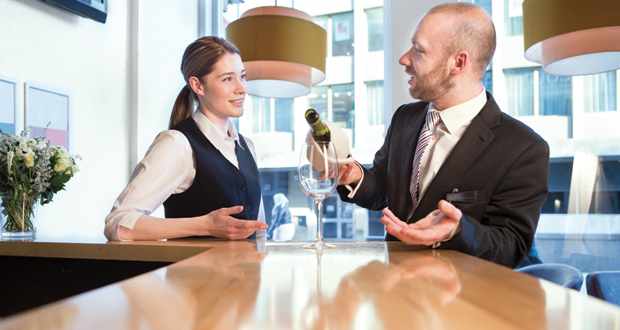 In 2016, the average property in CBRE’s Trends in the Hotel Industry survey sample spent 31.3 percent of its total revenue, or 42.8 percent of its total operating expenses, on labor costs. This includes the salaries, wages, benefits, service charges, and bonuses paid to employees, as well as payments made for contracted labor. By far, labor-related costs are the largest operating expense for hotels, regardless of property type.

Not only is labor a large expense, it’s a growing expense. According to the Bureau of Labor Statistics, the average total compensation for U.S. hospitality employees has increased more than 3 percent each year from 2013 through 2016. Given the prospects for low levels of unemployment in the foreseeable future, hotels should continue to see upward pressure on compensation rates. In addition to being a large and growing expense, labor is an integral part of the hotel experience. Despite the continued encroachment of automation into hotel service, the interaction with employees is frequently the subject of guest reviews.

To extract value from rising labor costs, the training of hotel employees is critical. Proper training can lead to increased productivity, improved guest satisfaction, revenue growth through upselling, and enhanced employee satisfaction that leads to lower turnover. All this can improve both revenues and profits. 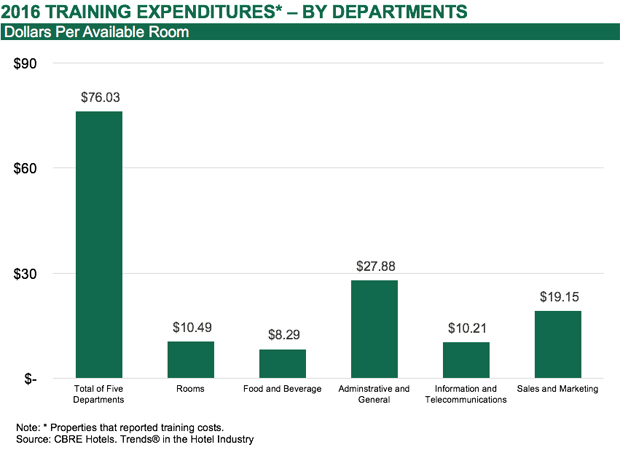 Since 2015, CBRE Hotels’ Americas Research has been tracking training expenditures within the following five hotel departments in its annual Trends survey: Rooms; Food and Beverage; Administrative and General; Information and Telecommunications Systems; and Sales and Marketing. The 11th edition of the Uniform System of Accounts for the Lodging Industry defines training costs within these departments as: “Training: Includes the cost, other than payroll costs, that can be directly attributed to the training of employees in the department.

Examples include the costs of training materials, supplies, certification programs, and instructor fees. The cost of employee wages incurred during training is charged to Salaries and Wages.” 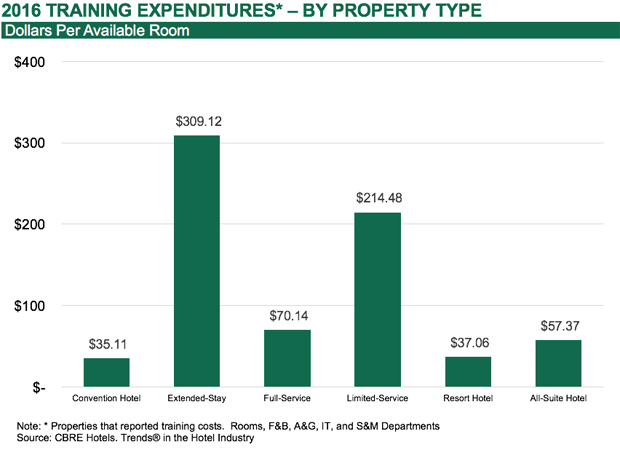 It is interesting to note that the second greatest training expenditures are found in the Sales and Marketing department, despite the relatively low number of employees. In 2016, training expenses in the Sales and Marketing department averaged $19.15 PAR. This compares to $10.49 PAR in the Rooms department and $8.29 PAR in the Food and Beverage department, two areas with many more employees. It appears that hotels are making a relatively strong investment to train their sales and marketing personnel.

When analyzing training costs by property type, it is interesting to note that the greatest expenditures on a PAR basis were seen in extended-stay and limited-service hotels. Granted, the room counts at these property types are smaller, but the differences in PAR expenditures are significant.

In 2016, extended-stay hotels spent the most on training ($309.12 PAR), followed by limited-service service properties ($214.48 PAR). Conversely, convention ($35.11 PAR) and resort properties ($37.06 PAR) spent the least. To be fair, the range of training expenses measured as a percent of total department expenses is much tighter. In 2016, convention hotels spent 0.15 percent of their total departmental expenses for training, while all-suite properties invested 0.29 percent. 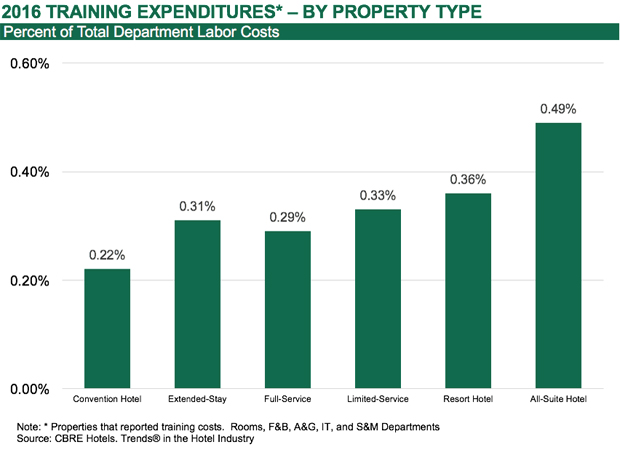 As noted before, CBRE began tracking training costs in 2015, so we only have two years of data to analyze. Based on this narrow time frame, training expenditures for the Trends sample were down 4.2 percent from 2015 to 2016. For reference purposes, total departmental expenses at the same hotels during this same period rose by 1.5 percent.

Most lodging forecasts (including CBRE’s) call for RevPAR growth between 2 and 2.5 percent during the next few years. Facing limited revenue growth, hoteliers are pressured to find areas to control or cut expenses. Given the fact that labor costs are expected to lead the growth in operating expenses, will hoteliers match this surge with an increased investment in training? Or, will training be viewed like most other costs and subject to cuts?

About the Author
Robert Mandelbaum is Director of Research Information Services for CBRE Hotels’ Americas Research. To benchmark the performance of your hotel’s training expenditures, please visit pip.cbrehotels.com or call (855) 223-1200.