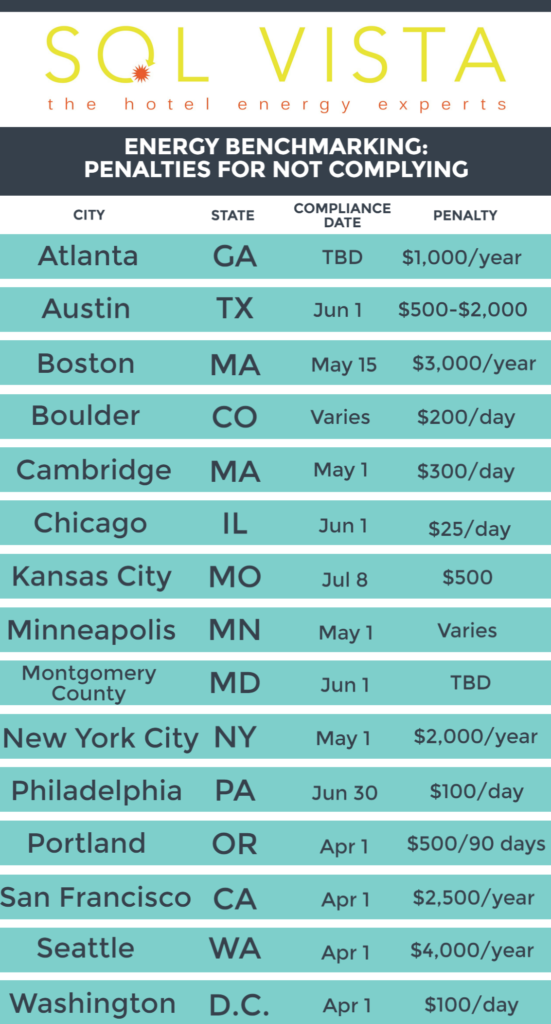 In the U.S., 16 locations, ranging from entire state policies to county laws, require some type of energy benchmarking. Many regulations are new, and the cumbersome process is costing hotels thousands of dollars every year.

Energy benchmarking–the process of tracking a building’s annual energy use and using a standard metric to compare the building’s performance against past performance and to its peers nationwide – is gaining momentum as businesses and building owners see huge savings in crunching the numbers and making small adjustments to their energy use. But as more cities and states adopt annual benchmarking regulations, the new procedures and requirements are sometimes unclear, confusing, and conflict with other energy goals and programs. As hotel managers scramble to keep up, some are getting hit with thousands of dollars in non-compliance fees.

Steve Kamykowski, area director of engineering for Kimpton hotels in Chicago, Minneapolis, Milwaukee, and Cleveland, said that he oversees five hotels in Chicago, where the city requires that energy benchmarking data be submitted every year by June 1. This year, all Kamykowski’s hotels in Chicago have been benchmarked, but even though he’s familiar with the requirements and has been through the process before, there was still a problem for one of the five hotels. “We received a letter from city stating that the benchmarking process did not happen properly and that we’re eligible for a fine,” he said. “The chief engineer had to go through the process again and resubmit [the data], and now we’re waiting.”

One of the problems is that many energy benchmarking regulations are new, like the program in Chicago that is only three years old.

“Sometimes there’s not a lot of direction,” Kamykowski said. “The city doesn’t always describe things the best, and if you’re not familiar with the different building systems, it makes it more difficult. Fortunately, they did give us time to catch up once we started asking questions.”
For all 16 locations that require benchmarking, building data must be entered in a federal database: the U.S. Environmental Protection Agency’s program, Portfolio Manager, which then uses the data to calculate the building’s Energy Star score.

Kamykowski noted that his assistant is the one who usually enters all the building data into Portfolio Manager, and he knows that it’s a massive amount of work. Some of the hotels he manages, including the Allegro and three other Kimpton hotels in Chicago, use SOL VISTA’s Skywalk software platform to more efficiently gather the data and report it in the EPA Portfolio Manager. One hotel—the one that needed to resubmit its data—chose not to use Skywalk this year.
“If it was up to me, I would definitely implement the platform at all the hotels I manage,” Kamykowski said. “I think for the minimal cost, it does assist us in doing our jobs better and I think I would recommend it to other hotel managers.”

“Due the regular turnover of ownership, management, and personnel in the hotel sector, there is always a possibility that a property is unaware that it has benchmarking fines accruing,” Holloway said. “So the first thing we check when a new property is enrolled in our Skywalk program is if it is up to date on the required benchmarking reporting. In this manner, during just the first week of joining the Skywalk program, we have helped properties avoid additional fines.”

According to Holloway, some hotel managers don’t realize that not complying with benchmarking rules is costing them money, or that they can avoid non-compliance fees and even lower their utility bills by benchmarking their hotels’ energy.

Learn more about benchmarking regulations in your area.

STR: 2020 Is Officially the Worst Year on Record for U.S. Hotels