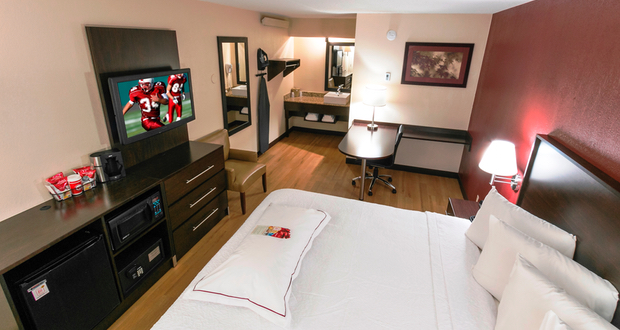 With continued growth in the United States and expansion into international markets, Red Roof has a lot to be excited about. The economy chain is well on its way to surpass 500 properties by the end of 2016, and its upscale economy Plus+ product has been gaining traction. We sat down with Chief Development Officer Phil Hugh and President Andy Alexander at the Lodging Conference in Phoenix last month to discuss Red Roof’s momentum and how its properties stand out from the competition.

Phil, during the View from the Top development panel, you said people sometimes forget about the economy segment. Can you elaborate?

Hugh: I think it’s been overlooked since the meltdown of ’08 and ’09. All of the dollars that have gone into the industry since then have gone into select-service and above. The proof is in looking at the brands that have been launched since 2010. Anybody who talks about economy since then ends up in mid-market or select-service, because it’s a very difficult segment to compete in.

What makes Red Roof stand out in the economy segment?

Hugh: This brand has really risen to the top of the economy segment because of what was done between 2009 and 2013. Andy and the team renovated 200 assets, disposed of assets to our franchisees, required them to do PIPs, and teed it up for me to come in with a franchise machine and drive it forward.

Alexander: We’ve made a conscious effort to dominate the economy segment, as opposed to many of our competitors who are trying to shatter economy hotels and move up. There’s certainly a marketplace for our product and a large clientele for our product, and we just decided that if we could do it the best and be at the top of that segment, that’s where we want to be. It’s a tough segment to be continuously competitive and have your franchise community renovate, keep up the their product, and keep that consistency, but we’re the group that knows how to do it.

How much of the portfolio has recently been renovated?

Hugh: We have less than 10 percent of our supply that we’re in healthy conversations with right now. The majority of our hotels are renovating and moving up, or they’re done and enjoying good healthy occupancies and rates. Since we did it corporately first, our franchisees are following our lead because they saw the success.

Are you still focused on conversions rather than new-builds?

Hugh: The mid-market and select-service areas are taking advantage of a strong economy and an extended cycle to continue to force their existing product up creek. The hotel owner has to decide whether investing several million dollars into their current hotel to stay in the brand is the right thing to do. It causes them to pause. Sometimes the best decision is to reposition into a different segment. A full PIP in a Red Roof Inn versus what would be required at a Hampton or a Holiday Inn Express is still less expensive for us, and our product is great. So it creates a lot of opportunities. I’d love to have a bunch of new construction properties in our pipeline, but it doesn’t make a lot of financial sense when you can buy a hotel for half the price and renovate it for 15 or 20 percent more and still be 40 percent below what a new construction would cost. So, our investment opportunity exceeds much of what is out there in other segments right now.