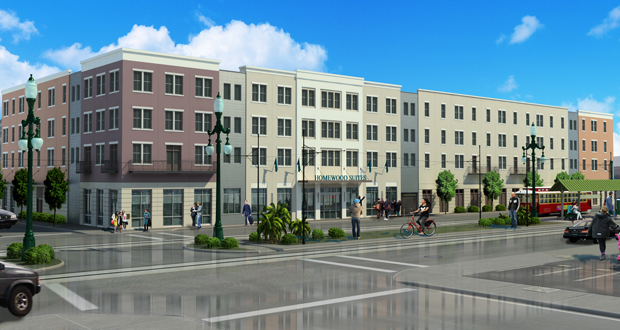 Hilton’s All Suites brands—Embassy Suites, Homewood Suites, and Home2 Suites—have been expanding rapidly since Hilton formed the All Suites category in 2015. This year alone, Hilton plans to open more than 125 All Suites hotels. On Thursday, Hilton announced that it officially opened its 800th all-suite property—Homewood Suites by Hilton New Orleans, a 207-suite hotel in the city’s French Quarter. The all-suites category accounts for 15 percent of Hilton’s portfolio and boasts nearly 120,000 rooms around the globe. And there are plans to continue its expansion domestically and internationally.

Bill Duncan, global head of Hilton’s All Suites brands, told LODGING that the segment’s success is a testament to its strength and popularity among owners and developers, as well as customers. “We started as a niche segment and have since become more mainstream. These brands are phenomenally popular and there’s a lot of momentum right now,” Duncan says. “In the 28 years that I’ve been with Hilton, the suites category has tended to perform extremely well on a consistent basis. These brands have some of the highest customer satisfaction scores and percentages of Hilton Honors members in our entire enterprise. They’re really popular with owners and developers as well, because we’ve built brands that guests love and want to come back to.”

While the company’s current all-suite openings are primarily based in North America and the Caribbean, Hilton has more than 530 projects in the pipeline in both urban and suburban markets around the globe. Four international Embassy Suites properties are slated to open in St. Kitts and Nevis, St. Thomas, Saudi Arabia, and China.

Hilton has several all-suite prototypes for hoteliers looking to develop in this particular market space. Embassy Suites’ Design Option III prototype allows for a variety of suite-styles and a modern, open-air atrium, while Homewood Suites’ Gen 9.2 prototype allows for a mix of up to 85 percent studio suites. Home2 Suites’ prototype has a smaller footprint that requires less land and provides streamlined construction model for a fast ramp-up process.

“In late 2015, Hilton put this category together to build on the strength of what we were seeing in the all-suite segment and to leverage synergies and the power of a shared distribution story,” Duncan describes. “Over the course of time, these brands have evolved and innovated to stay relevant and to meet the needs of owners, developers, and guests.”

Each of the individual brands reached their own milestones last year—Embassy Suites’ 225th opened hotel, Homewood Suites’ 400th opened hotel, and Home2 Suites’ 100th opened property. The Home2 Suites brand is one of the fastest growing brands in the Hilton portfolio and is on track to surpass its 200th open property in the coming year.