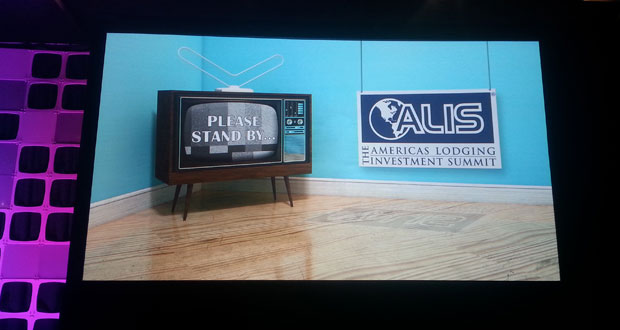 The cold and rainy weather did nothing to dampen the enthusiasm of the approximately 3,000 delegates who attended the 2017 Americas Lodging Investment Summit (ALIS) this week in downtown Los Angeles. The event, which took place Jan. 23 to 25 at the J.W. Marriott at Microsoft Live!, featured hours of programming that tapped the expertise of top industry professionals and CEOs and prepared delegates to invest wisely in the year ahead.

The meeting officially kicked off Monday with a plenary session. James E. Burba, president of BHN and Chair of ALIS, opened by introducing this year’s theme—Please Stand By. The theme captured what many hoteliers are feeling following the surprising results of the 2016 election. “When we were planning this conference last summer we kept asking, ‘What do you think is going to happen? Where is the cycle? Where are we?’,” he described. “And we don’t know.”

Burba also beamed at the high attendance, which, as of Monday afternoon, was well on its way to setting a record. “Millions of dollars have been spent as a result of ALIS on educating future leaders, on research, and scholarships. So thank you for being here, it makes a big difference,” Burba said to a packed Microsoft Theatre.

Mark Carrier, president of the B.F. Saul Company Hospitality Group and current chair of the American Hotel & Lodging Association, shared some of the wins the association has seen over the past year. He cited the association’s efforts to fight illegal booking operations and booking scams, and the health of AHLA’s PAC, which is making great strides on Capitol Hill. Carrier also discussed AHLA’s Dreams Happen Here campaign, which aims to promote the positive impact the lodging industry has on the overall economy. His outlook for the year ahead was very positive. “The hotel industry is based on hard work, a deep desire to succeed, and advance, and that’s why we’re all here today,” he said.

AHLA President and CEO Katherine Lugar and Ron Brownstein, political director at Atlantic Media Company, discussed the election and its possible ramifications on the hotel industry. When Lugar asked Brownstein what ALIS attendees should know about Donald Trump, he noted that everyone should keep in mind that the president has no permanent alliances. “He has no permanent allies or adversaries…The only way to deal with Donald Trump is the reverse of the way he’s going to deal with him,” Brownstein said. “People will have to stand up for what they think is right. And sometimes he’ll agree with them, and sometimes he won’t.”

Leading hotel data analysts Jan Freitag, senior vice president of STR, Suzanne Mellen, senior managing director of HVS, and Mark Woodworth, senior managing director of CBRE, spoke with Jon Bortz, chairman and CEO of Pebblebrook Hotel Trust, about their predictions for the year ahead. The panelists were quick to emphasize that they don’t have crystal balls, but overall the outlook for 2017 was positive. Freitag said he expected to see slow but steady RevPAR growth in 2017 and 2018, 2.5 percent and 2.6 percent respectively.

Between speeches, Burba presented the ALIS Lifetime Achievement Award to Thomas Corcoran, chairman of FelCor Lodging Trust. Corcoran thanked everyone for the recognition, but at the same time was adamant than he had much more to give to the hotel industry. “This is not the end for me, but really a continuation of all of my personal goals to stay active, work hard, continue to dream about what could be, and balance life with family,” Corcoran said.

As with every year, many companies used ALIS as an opportunity to make announcements and update the industry on any big moves they made during 2016. One of this year’s announcements came from Hilton, which is launching a new soft brand called the Tapestry Collection. The new collection already has seven properties signed and 35 more in the pipeline and will include upscale properties. Virgin Hotels announced the development of a new hotel in New Orleans. The property, which will be in the trendy Warehouse District, is expected to break ground in April and open its doors in early 2019. And Marriott showcased some of its new initiatives within the Element and Aloft brands with a Pop-Up Innovation Laboratory, featuring everything from virtual reality to snack samples from its new F&B programs.

Despite a more cautious outlook than what’s been seen in recent years—attributed by many to the winding down of the current lodging cycle—overall, ALIS attendees were feeling very positive about 2017. It is still a good time to invest in the lodging industry, and we should look forward to many interesting and successful projects in the coming years.