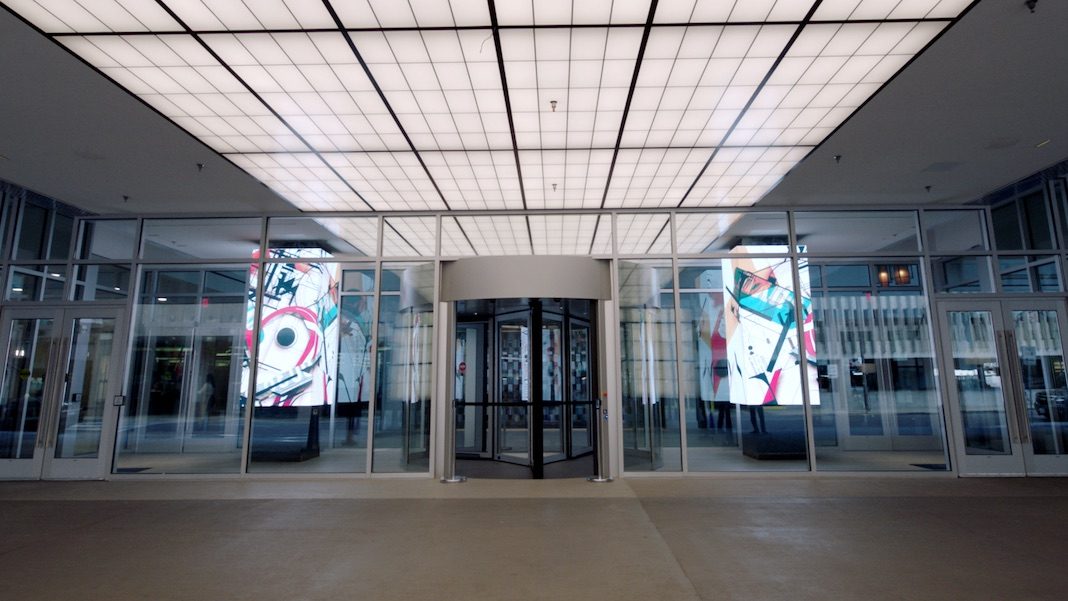 Set within Dallas’ Arts and Business District, the Sheraton Dallas Hotel wanted its most recent transformation to reflect the city’s 10-year redevelopment efforts showcasing its diverse arts scene. Chartres Lodging Group led the multi-million dollar renovation, which recently completed its final touches with the installation of two LED columns at the property’s entrance.

The nearly nine-foot-tall columns are wrapped entirely in screens and visible from the street, lobby, restaurant, and bar. Leftchannel Founder and Creative Director Alberto Scirocco says that the position creates an “Arc de Triomphe feel” when visitors walk in and out of the hotel. “The entrance is the beginning of a relationship. It can also be your exit from the hotel, so this sense of triumph is a very powerful feeling. It’s the first thing you see—the first impression,” Scirocco says.

When designing the piece, Scirocco’s studio accounted for a variety of demands—the hotel’s designers, renovation team, architects, management, guests, and passerby. “You have people on the street coming in and you also have people on the inside of the hotel—people who have a very different agenda versus the people coming in from the outside.”

The digital design element needed to balance those diverse needs, creating an eye-catching installation that wasn’t too visually noisy. “We created both the perception of something that is big that you want to see from the outside, but also something that amplifies the mood of the people on the inside of the hotel versus being excessively disruptive,” Scirocco explains. The medium allows for the content to change depending on whether the property wants to dial up the graphics to create a centerpiece attraction or dial them down as background art that enhances tone.

Scirocco says that this kind of digital art installation can be used in other areas of hotels—like lobbies, restaurants, bars, and even near pools—to build an experience, much like a beachfront property that has expansive windows with seaside views.

All forms of art may prompt some degree of engagement, but Scirocco says that digital art installations are particularly dynamic and reminiscent of the art form he originally began with as a kid and continued with into adulthood—graffiti and large murals—in that they elicit powerful responses and interactions from those who pass by. The added element of motion in animated art, by nature, demands attention and creates appeal, he says. “When people are walking inside the Sheraton, you see them taking selfies in front of the screens. They’re taking pictures of it and sending to their friends,” he adds.

Just like some forms of graffiti, Scirocco says, this kind of screen-based art can begin polluting people’s environments if designed and installed without intention or strategy. “The first thing a lot of people think about graffiti is tagging—that’s what you see the most. People hate that, and so they have a negative feeling about graffiti, when really graffiti by artists is beautiful when it’s done properly,” Scirocco explains. “I think the same thing about digital technology. If we start torturing people with screens, they’re not going to be happy about seeing them.”

“Right now, there’s a real sense of shiny. You have this new medium that is very powerful and everybody’s kind of jumping on it,” Scirocco says. He points to early films that captured audiences’ attention because of the novelty of the medium rather than the inventiveness of the stories. “As the medium becomes more common, people are going to be a little less excited about it. Then, the content becomes the big thing.”

The ability to change what graphics and animations are displayed on digital art installations is one of the biggest benefits. The Sheraton Dallas Hotel plans to update its art regularly, evolving the piece over time to stay relevant and engaging. “You can update it, change it, modify things as time passes. It’s very universally relatable. People from different walks of life and ages get something out of it,” Scirocco says.

“The biggest thing for us is we want to make sure the vision drives the technology,” he continues. “We are doing it for the viewers and not the other way around.”

InTown Suites to Roll Out Newly Design Suites Across 188 Properties

Designing Outside the Box

Finance Kate Hughes - September 22, 2020
In August, STR reported that U.S. hotel occupancy topped 50 percent for the first time since March. That this was a benchmark to celebrate...