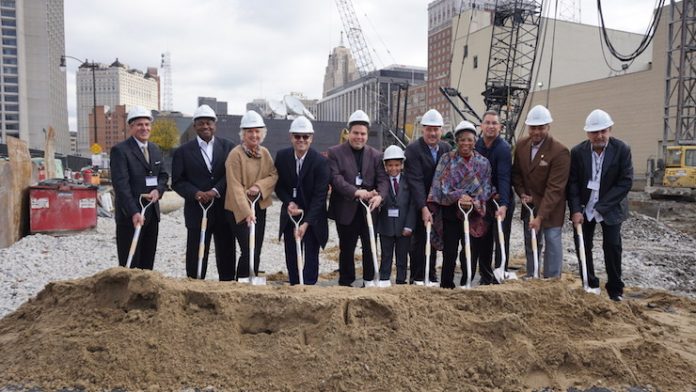 “We are thrilled to see this project further Detroit’s inspiring economic growth and we are proud to be a player in the ongoing development of this vibrant and historic community,” said Janis Cannon, senior vice president, upscale brands, Choice Hotels. “The hotel’s desirable location in the city’s booming downtown central business district will appeal to an influx of business professionals and leisure travelers to the Motor City. We look forward to this location joining the award-winning Cambria Hotel Traverse City in providing Michigan travelers with locally inspired lodging options to meet all their travel needs.”

The Cambria Hotel Detroit Downtown will be a part of an adaptive reuse of the historic former home of WWJ studios. The site is a short drive from various national corporate headquarters, including Ford, General Motors, Chrysler, and Quicken Loans, as well as Wayne State University, Henry Ford Hospital, Detroit Medical Center, and TechTown—Detroit’s urban technology and research center. Several event venues are convenient to the hotel site, including the TCF Convention Center two blocks away, Little Caesars Arena, Comerica Park, and Ford Field, as well as a number of museums, breweries, and restaurants.

The hotel will have spa-style bathrooms with Bluetooth mirrors; a rooftop bar with a pool; an onsite restaurant, Verona by Fabio Viviani; multi-function meeting space; a grand ballroom; a fitness center with spa amenities; and locally inspired design.

The Cambria Hotel Detroit Downtown is being developed through a joint venture between two Michigan-based companies: Means Group Inc. in Detroit and Koucar Management LLC in Troy. Koucar Management recently celebrated the start of construction on Cambria’s fifth location in the Washington, D.C., metro area last month. The group also has Cambria hotels under construction in Portland, Maine, and Shelby Township, Michigan.

There are currently 48 Cambria hotels open across the country. The brand is on pace for a record-breaking openings year in 2019 and is fast approaching 50 open Cambria hotels.

Navigating Conversations With Lenders During COVID-19