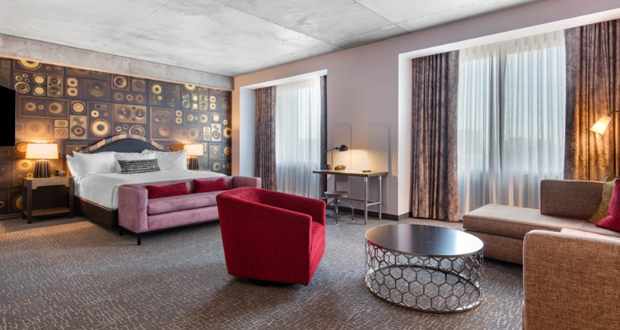 ROCKVILLE, Md.—Choice Hotels International, Inc., franchisor of Cambria Hotels, recently began a new effort centered on multi-unit development to help grow the brand further. On the heels of opening its 10th property in 10 months earlier this year, the expanded approach will use part of the $475 million in capital support the company has earmarked for the Cambria brand to target developers that will build multiple properties.

“The Cambria brand is coming off a record year of growth in 2017 and progress continues. While we will continue to invest in individual projects, we are experiencing strong demand from the development community as well as institutional capital partners who want to develop and invest in multiple projects with us,” says Mark Shalala, vice president, development, upscale brands, Choice Hotels. As a part of the investment strategy, Choice will be teaming up with several developers to expand the Cambria brand, including Four Raines Development and Fillmore Capital Partners.

“Taking a more programmatic investment approach with multi-unit developers is a winning strategy,” Shalala continues. “It can dramatically help accelerate growth while driving product and operational consistency across the chain. This helps increase brand equity for our owners and, most importantly, it improves the overall guest experience from market to market. For our developers, this approach establishes a consistent investment platform and level of capital participation from Choice. It helps improve return on investment and can make it easier to raise equity and secure debt for their projects, a critical factor at this point in the cycle.”

Cambria currently has nearly 120 hotels open or in the pipeline, located in 75 percent of the top 50 U.S. RevPAR markets. The brand delivered a strong performance in 2017 with a high LTR and results outpacing the industry in RevPAR, OCC, and ADR.

The latest Cambria openings include a mix of new construction and adaptive reuse projects.

“The Cambria brand is experiencing explosive growth,” Janis Cannon, senior vice president of Choice’s upscale brands, says. “Progress of this scale and speed is the result of our tremendous development collaborators as well as the demands of modern travelers who love the stylish, yet approachable Cambria brand. We’re starting off strong in 2018 with openings in Nashville and Philadelphia, and we look forward to bringing our great product to more guests’ favorite cities, including Boston before the end of the year.”