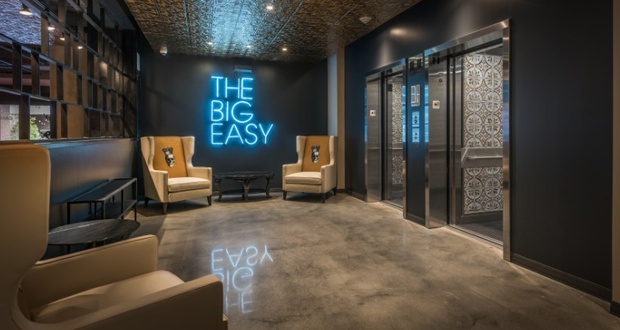 ROCKVILLE, Md.—Choice Hotels’ upscale franchise brand Cambria Hotels finished 2017 by opening the most properties in a single year and increasing the pipeline to the largest in the brand’s history. The brand now has 37 open hotels across the United States, including 10 that opened last year. In addition, there are more than 70 properties in the pipeline.

“Cambria Hotels’ rapid growth strengthens our position in the upscale segment. In addition to setting a record for openings this year, we also established important brand firsts, like opening on the West Coast in Los Angeles and bringing our first adaptive reuse to life in Chicago,” said Janis Cannon, senior vice president, upscale brands, Choice Hotels. “From the incredible relationships we have built with our developers, to the beautiful, locally-inspired designs of our properties, this brand is on the move. We look forward to introducing customers to more Cambria hotels in the coming year, including in Nashville and Philadelphia opening early in 2018.”

The brand’s aggressive expansion strategy includes locally-inspired new construction, adaptive reuse, and conversion projects. The 10 properties that opened in 2017 include:

Cambria Hotel Durham-Duke University Medical Center Area
Also opened on January 11 but in North Carolina, the 146-room hotel is in the heart of a globally ranked medical campus.

Cambria Hotel Los Angeles – LAX
Opened May 1, 2017, just minutes from Los Angeles International Airport and close to world-class tourist attractions, the 152-room property’s design is inspired by the fashion-forward city that surrounds it.

Cambria Hotel Chicago Loop – Theatre District
Opened on May 25 of last year, the 199-room hotel is situated above the historic Ford Center for the Performing Arts Oriental Theatre and in the center of an energetic business district. It is the brand’s first adaptive reuse project offering a décor that maintains the building’s colorful past through unique design features while presenting a sleek 21st-century aesthetic as well as modern essentials.

Cambria Hotel Newport
Opened on June 9 in Rhode Island), the 143-room hotel offers guests picturesque waterfront views and is a short distance from Easton’s Beach, the iconic Newport mansions, and the Naval Station.

Cambria Hotel Westfield
Opened December 19 in Indiana, the 152-room property is part of the Westfield Grand Park Village, directly across from Westfield’s Grand Park Sports Campus, and is a short drive from downtown Indianapolis.

Cambria Hotel North Scottsdale Desert Ridge
Opened December 21 in Arizona, the 130-room hotel is situated in Desert Ridge, which offers shopping and dining options at the intersection of Highway 101 and Tatum Boulevard. The property is minutes from downtown Phoenix.

Cambria Hotel Dallas
Opened December 31 in the formerly the historic Tower Petroleum building, this adaptive reuse property is in the heart of downtown Dallas, nearby to many businesses and leisure attractions.

Choice Hotels said that it expects to invest $475 million in corporate capital to grow the Cambria brand. The pipeline includes many of the top 50 U.S. markets, such as Austin, Texas; Burbank, Calif.; Baltimore; Calabasas, Calif.; Charleston, S.C.; Houston; Miami; Milwaukee; Minneapolis; Napa, Calif.; Orlando, Fla.; San Francisco; Tampa, Fla.; and Washington, D.C. In total, 36 franchise signings were executed in 2017, and the brand continues to perform with a high LTR and RevPAR.

“The Cambria brand’s growing pipeline is a direct result of the emphasis Choice Hotels places on the brand and the tremendous value proposition that it offers franchisees and guests. Developers are experiencing a strong return on investment, and we have created a product that perfectly caters to the needs of the modern traveler,” said Mark Shalala, vice president, development, upscale brands, Choice Hotels. “With 12 properties slated to open in 2018, we’re excited to keep our strong Cambria development progress going and continuing to help drive distribution in top RevPAR markets, and gain significant share in the upscale space.”

“Now is the time to reflect, experiment, and try new things..."