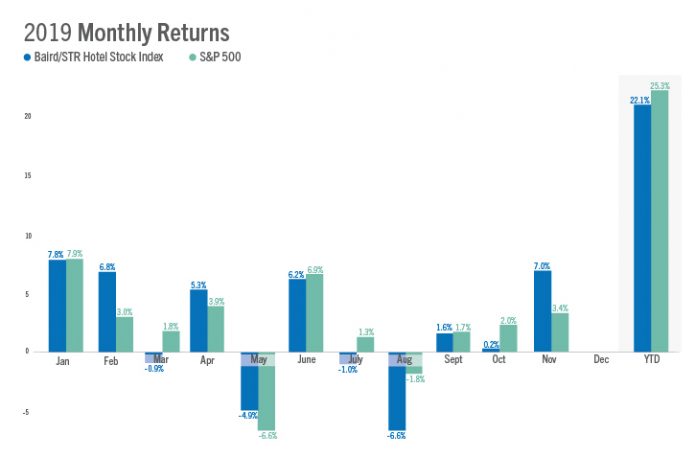 “Despite RevPAR decreases in three of the last five months, the hotel stock index has posted gains in three consecutive months,” said Amanda Hite, STR’s president. “That speaks to the long-term credibility that hotel stocks have earned as well as investors’ ability to see the big picture. Our latest forecast revision projects RevPAR growth to come in below 1 percent for both 2019 and 2020, so in terms of performance growth, these will be the hotel industry’s worst years since the recession. However, it appears that investors are placing greater consideration on net unit growth. Of the more than 205,000 rooms under construction in our U.S. pipeline database, 80 percent are affiliated with the 10 largest parent companies. This seems to outweigh the less-than-stellar industry performance.”

November performance of the Baird/STR Hotel Stock Index surpassed both the S&P 500 (up 3.4 percent) and the MSCI US REIT Index (down 1.8 percent).