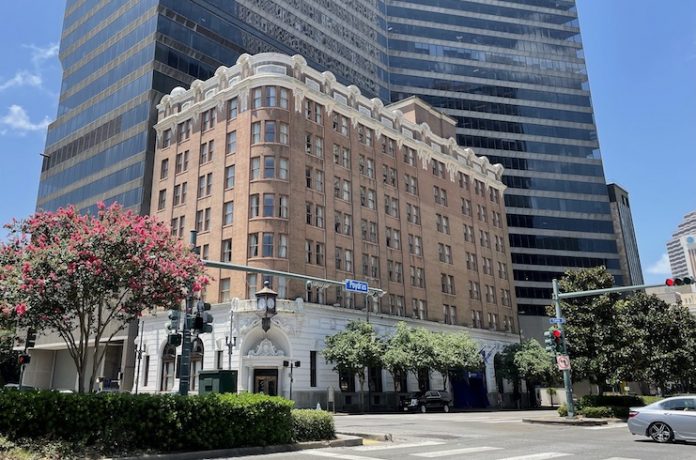 NEW ORLEANS—Following the purchase of The Frenchmen Hotel in June 2021, entrepreneur Robert Thompson’s hospitality firm, Angevin & Co., in partnership with GBX Group, which specializes in preserving and operating historic real estate in urban markets, has completed the acquisition of another landmark destination, The Whitney Hotel. Thompson purchased the property from Joe Jaeger. Tyler Robinson at Urban Properties represented Angevin & Co. on the transaction.

Thompson and his family moved to New Orleans in early 2021 due to both his love for Crescent City and his ambition to join its hospitality industry. With The Whitney Hotel, located in the New Orleans Central Business District, and The Frenchmen Hotel on Frenchmen Street, Thompson’s Angevin & Co. has an entryway to The French Quarter at either end.

“It is a privilege to honor the legacy of The Whitney Hotel by preserving its history while reimagining its future,” said Thompson, founder and CEO of Angevin & Co. “Located on the historic streetcar line and just blocks from The French Quarter and Caesar’s Superdome, The Whitney is ideally located for travelers in town for leisure, for business, or for sports and events as well as New Orleanians living and working in uptown. We’re going to bring new energy to this legendary property, reimagining experiences. This means opening the first on-site restaurant in the property’s history—a vegetable-forward, southern restaurant—as well as a thoughtful cocktail bar that transitions from afternoon happy hour to late-night last calls; and an aroma-filled, fresh flower boutique. We envision The Whitney to be more than just a place to stay—it’ll be a place you never want to leave.”

“When Robert articulated his vision for The Whitney Hotel, I knew the property would be in great hands with Angevin & Co.,” said Joe Jaeger, owner of J Collection. “Robert is looking at both The Whitney, and the city, with fresh eyes, and the ideas he’s bringing to the forefront will have a positive and lasting impact on the hospitality and tourism industry in New Orleans.”

“The current climate favors building new,” said Drew Sparacia, CEO of GBX. “But that’s not always the best choice, particularly when developing in urban neighborhoods. Often, these are older communities with existing properties that offer significant cultural value to their surroundings. Partnering with Robert and Angevin & Co., innovative and accomplished operators, is an exciting venture that allows The Whitney Hotel to be a reimagined, vibrant destination within the New Orleans community. We are proud to play a critical role in the preservation of The Whitney Hotel as we expand our involvement with protecting historic structures throughout New Orleans.”

Standing in contrast to the high-rise office buildings of the CBD, The Whitney Hotel building was originally constructed as a bank. Now registered as a National Historic Landmark, The Whitney Hotel has 93 guestrooms, 24 suites, and 30-foot lobby ceilings complimented by crown molding throughout the hotel. Thompson’s Angevin & Co., along with design partners FAM Design, will preserve the integrity of the building while making renovations and updates.

The Whitney Hotel is anticipated to re-open to guests in Q1 2023.