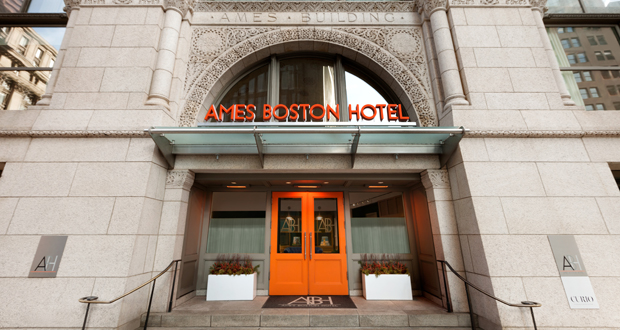 BOSTON–The historic Ames Boston Hotel, a member of the Curio Collection by Hilton and of the Gemstone Collection by BENCHMARK, recently completed its $6 million redesign of the hotel’s public spaces by New York City-based architecture and design firm Glen and Co. Architecture. Constructed in 1893 as the headquarters for the Ames families’ agricultural tool company, the 114-room boutique hotel opened in 2009 near Boston’s busy Financial District.

The revitalized 15-story Ames Boston Hotel merges the past, present, and future, offering a blend of modern style and old-world sophistication. The renovation preserved many original features, including the lobby’s tiled mosaic arched ceiling and a marble staircase that runs from the first floor to the roof. Upon arrival, guests now enter into a renovated lobby with check-in stations and a casual seating area accented by warmly-toned wood shelving and trim pieces. Adjacent to the revamped entryway is The Library, which boasts the same mid-century design scheme that begins in the lobby, and serves as shared meeting and workspace for guests. 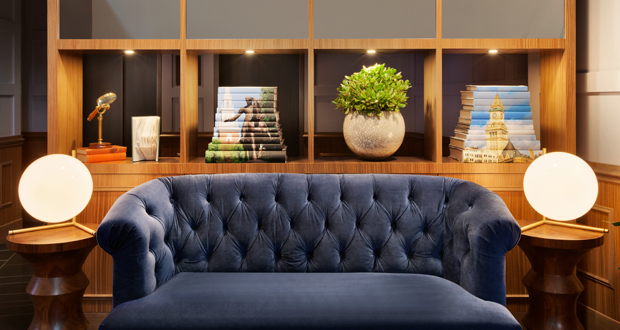 “I’m thrilled to announce that Ames Boston Hotel’s $6 million renovation is now complete and that the property has been reinvigorated as a destination for local Bostonians and travelers alike,” said Trish Berry, general manager of the Ames Boston Hotel. “The recent transformation of Boston’s architectural icon has resulted in dedicated, state-of-the-art event space, an incredible new on-site restaurant by acclaimed Chef Mary Dumont, a welcoming new lobby, and comfortable shared work space called The Library, all of which have been warmly welcomed and enjoyed by recent guests.”

The Ames and Oliver & Oakes meeting rooms and pre-function vestibule on the provides 1,700 square feet of new private event space for personalized, intimate get-togethers, banquets, and conferences. As a nod to the Ames family’s time-honored and long-standing historical impact on Boston and the country, the Oliver & Oakes room bares the names of Oliver and Oakes, sons of the family’s patriarch, Oliver Ames, Sr., the founder of the famed Ames Shovel Works. The rooms are inspired by American manufacturing, uniformity, and ingenuity. The design also incorporates full audio visual capabilities for slideshow and video presentations, a plug and play sound system, a plethora of outlets, and a built-in phone charging station.