Hoteliers have traditionally evaluated performance based on a variety of metrics across the industry, the common denominator being hotel-collected revenue, most similar to P&L revenue. Hotel-collected revenue is not only used to calculate RevPAR and competitive index performance, it also forms the key basis for operator and hotel staff incentives. However, this figure does not capture a fully accurate view of a hotel’s performance. Hotel-collected revenue doesn’t account for what the guest actually paid, i.e., the markups associated with merchant-model OTA, opaque, and wholesale business, nor does it account for the transaction costs paid to acquire customers, i.e., channel costs, loyalty points, and retail commissions.

The growth in both guest-paid revenue and net revenue over the last few years relative to the growth of hotel-collected revenue illustrates this idea that the industry isn’t being shown true performance. Kalibri Labs has established metrics to show two forms of net revenue: COPE (contribution to operating profit and expenses) revenue—which excludes direct commissions and other transaction fees—and net revenue, which additionally excludes sales and marketing expenses.

To put that seemingly small percentage (0.07 percent) difference between COPE revenue growth and guest-paid revenue growth into perspective, each 0.1 percent of growth is worth $142.5 million to the hotel industry. If hotels grew COPE revenue at the same rate as guest-paid revenue, they would have retained almost $100 million in additional revenue. That additional COPE revenue is net of transaction-related acquisition costs and is a direct benefit to the bottom line.

Guest-paid revenue accounts for the markup that guests pay when booking net-rated business through a wholesaler, opaque, or a merchant-model OTA. There has been a recurring trend over the past several years of growth in the OTA source in general, but also within it, growth in retail-model business. This reflects the growth in both Booking.com as well as Expedia’s Hotel-Collect or Traveler Preference program. The shift from net-rated or merchant-model OTA business to retail business somewhat artificially inflates traditional ADR growth, because the reported ADR is increasing as relatively fewer net rate bookings are reported, and this is not the same thing as seeing actual hotel rate growth. This belies the true growth in what guests are actually paying to stay at hotels. 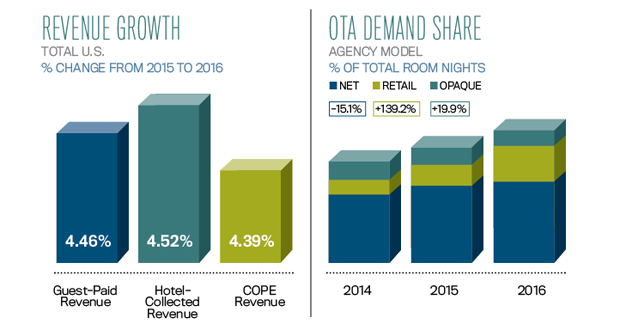 Aside from masking true rate growth, hotel-collected revenue does not account for the costs inherent in acquiring guest bookings. COPE revenue nets out direct customer acquisition costs, including channels costs, loyalty points, and all forms of commissions paid to third parties. What becomes clear in looking at the growth in COPE revenue relative to that of guest-paid and hotel-collected is that the channel shift seen in the industry over the last several years has led to slower growth in revenue flowing through to the bottom line.

An increase in room night share through more costly channels has contributed to the growth gap between hotel-collected revenue and COPE revenue. Hotels are retaining less of the revenue paid by guests than in years past, which is impacting their bottom lines at a time where they’re are seeing record room rates and high occupancies.

Measuring industry and individual hotel performance based on guest-paid and COPE revenue gives a more accurate picture of what guests are willing to pay, as well as what hotels are retaining after paying out customer acquisition costs. The growth in hotel-collected revenue paints a potentially more positive picture than is indicated by the growth in both guest-paid and COPE revenue. The hotel industry remains in a positive business environment with strong revenue growth, but channel shift and increased costs combined with softening rate growth provide cause for attention.

About the Author
Matt Carrier is director of account management and revenue strategy at Kalibri Labs.

The Hidden Costs of Operating Without an Advanced RMS