Home Design A Sense of Place: The Lobby at Cambria Hotel Boston Somerville 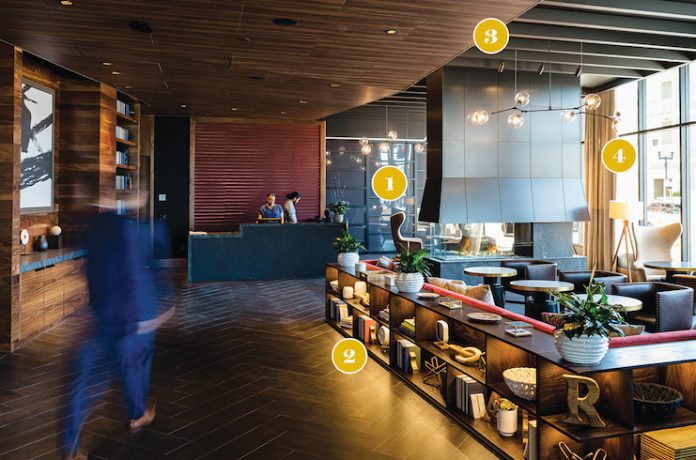 Opened in June, the Cambria Hotel Boston Somerville contributes to the ongoing transformation of nearby historic Union Square. The 163-room property is the result of Boston developer The Noannet Group’s partnership with Cambria Hotels, an upscale brand franchised by Choice Hotels International; architecture firm CambridgeSeven; and interior design firm Bill Rooney Studio. “The new Cambria hotel offering is rooted in the context of place,” says Rooney. In fact, “Cambria is the brand that specifically tries to tie into place, which I think is a positive component of their DNA.” Rooney says he found the property’s culturally rich environs inspirational. “Somerville is home to a population of switched-on, at ease, artistic, independent thinkers who are diverse, and with a strong sense of community involvement,” he describes. “The personality of the hotel is derived from a modern spirit alongside a nod to the casual refinement that exists in the region, the eclectic mix of the light industrial fabric, historic legacy, adjacency to world-class academics, and the abundance of culinary experiences. We tried to create an environment that spoke to all of those components.” While creating a sense of traditional elegance with walnut wood-paneled walls, detailed ceilings, and a double-sided fireplace, the Cambria Hotel Boston Somerville’s lobby also reflects design trends by incorporating plenty of natural light as well as spaces where guests can congregate for informal discussions.

Toward the back of the lobby, behind the fireplace, is a section that can be draped off to serve as a small meeting space. Thus, the fireplace effectively creates a separate area near the restaurant entrance.

The lobby’s book collection alludes to the Boston area’s intellectual legacy, founded in world-class universities such as Harvard, Tufts, and MIT. Other accessories evoke the neighborhood’s eclectic, artistic side.

The wood paneled and metalwork portions of the ceiling help to divide the lobby into a check-in space and a space for relaxing or meeting with colleagues by the fireplace, respectively. “The areas create a dynamic flow of activity,” Rooney notes.

The iron fireplace is reminiscent of industrial metalwork. “Its design has a hint of mid-19th century, but at the same time, the metalwork harks back to Somerville’s light industrial history,” says Rooney.