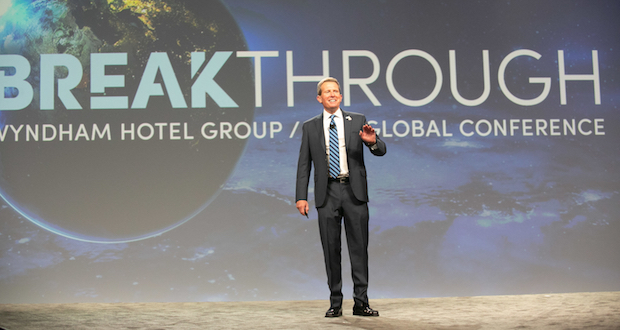 Wyndham has had an eventful 18 months since its last global conference in September 2016. In the past year alone, the company added two hotels a day, created a new soft brand, announced several acquisitions (including 200 AmericInn properties, 900 managed and franchised La Quinta hotels, and plans to convert 46 AHIP hotels), and just this month made a deal to sell its economy brand Knights Inn. During its 2018 Global Brand Conference at Mandalay Bay Resort & Casino Conference Center in Las Vegas from April 9-11, thousands of the company’s leaders, owners, and partners looked towards another breakthrough year in the months ahead.

The theme of the conference—”Breakthrough”—encompassed Wyndham’s accomplishments of the past year and goals for the future: striving to become the world’s largest “independent pure-play” hotel company; launching new initiatives across its 20 brands; expanding its global footprint to 8,400 hotels; and improving quality. During the conference’s opening general session, Wyndham Hotel Group CEO Geoff Ballotti announced plans to add “by Wyndham” to the company’s brand names including Super 8, Days Inn, Ramada, Howard Johnson, and more.

“We’ve been working on our quality, we’ve been buying quality brands, Wyndham’s starting to really stand for something quality related,” Ballotti told an audience of thousands of hotel owners, managers, and hospitality professionals. The company’s consumer research showed that with ‘by Wyndham’ added to brand names, customers would be more likely to stay, book direct, believe in brand quality, be willing to pay more, and aware that they could earn Wyndham Rewards points. “Our brands are searched 6 billion times over the year. From a search standpoint, from a pay-per-click standpoint, from a digital media standpoint—you’d be crazy not to do this.”

“This is our breakthrough,” Lisa Checchio, senior vice president of global brands at Wyndham Hotel Group, said during the opening session. She cited that in 2007, adding ‘by Wyndham’ to Wingate increased that brand’s awareness by 11 percentage points. “Simply putting our name on the front door will drive tremendous awareness for all our brands,” Checchio explained. In the United States alone, she said that the name change would equate to 500 billion roadside impressions.

The new brand names are part of the company’s efforts to define and refine its brands through the lens of quality. And quality is indeed the name of the game for Wyndham—during the conference’s opening general session, Ballotti emphasized the importance of consistency across all hotels flying Wyndham brand flags, especially in light of the new brand-name announcement. He added that Wyndham will continue to cut underperforming properties out of its portfolio. “We are working with hotels to increase and improve their quality, and when we can’t get there, yes, we say ‘goodbye,’” Ballotti said. “We said ‘goodbye’ to 80,000 rooms that have been substandard over the last three years, and we’ll continue to do that to push our quality.” To continue making that happen, the company is increasing its number of field-based directors of franchise operations (DFOs) by 20 percent to meet the demand of owners and operators for on-site support.

Wyndham will also say ‘goodbye’ to its Knights Inn brand this year, which the company plans to sell to RLH Corporation for $27 million, and will say ‘hello’ to La Quinta before the end of the second quarter. Most La Quinta and AmericInn hotels have a rating of four-stars or above on TripAdvisor. Similarly, each of the 70 independent hotels added to Wyndham’s Trademark Hotel Collection in the six months since the soft brand’s launch last year have TripAdvisor ratings of four stars or above. Throughout the conference, Ballotti routinely highlighted that Wyndham brands hold four out of five of the top spots in JD Power’s Customer Satisfaction Index in the economy segment and potentially in the midscale segment as well once the La Quinta acquisition is completed.

Beyond acquisitions, Wyndham is improving quality with technology by taking its systems to the cloud and replacing its central reservation system (CRS). Chief Marketing Officer Barry Goldstein said that the technology that previously ran central reservations had been in place for all brands since the early 1990s. “They were not able to handle the complex needs of today’s customers and the many new channels that have evolved over the past years,” Goldstein explained. Now, 14 Wyndham brands are on the new Sabre CRS system. “We are processing millions more transactions and we’re on the shelves in so many more places. Conversions of brands that are on the new CRS are 10 percent higher,” Goldstein said. Wyndham plans to complete the system rollout to the remainder of its brands by mid-June.

Other new initiatives include a partnership with Wayfair to offer franchisees an opportunity to purchase brand-standard furniture, fixtures, and design products more easily online and receive free shipping. Wyndham’s two biggest brands—Super 8 and Howard Johnson—will be the first with access to the Wayfair platform starting in May. The company plans to roll it out to Days Inn, Wingate, Microtel, and La Quinta, as well.

The company is also pushing to expand guest loyalty through Wyndham Rewards, which reportedly has 55 million members, 5 million of those joining in the last 12 months, and earlier this year, it launched a new Wyndham Rewards site. Goldstein also announced at the conference that the company will rollout mobile check in and check out on the Wyndham Rewards app.

“We still have room to grow,” Chip Ohlsson, executive vice president and chief development officer for North America, Wyndham Hotel Group, said. The company will incentivize that growth further by offering the first qualifying 50 owners who refer properties to join the Wyndham family of brands 25 percent of the first year royalties. “As we continue to look for great acquisitions, build our pipeline for new construction, and drive organic growth through quality conversions, we won’t stop until all of North America is Wyndham blue.”