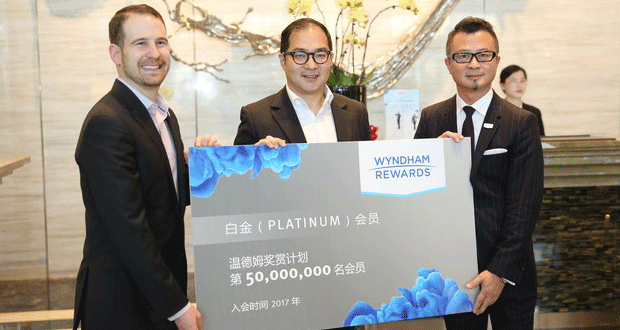 SHANGHAI—Wyndham Rewards, the award-winning, critically-acclaimed, guest loyalty program of hotel giant Wyndham Hotel Group, has announced it has surpassed 50 million members worldwide, marking a major achievement for the re-imagined program and highlighting the aggressive expansion of its globally recognized brands.

The milestone member—enrolled earlier this week at the newly opened Wyndham Grand Xiamen—highlights the success of broader efforts by Wyndham, best known for its dominant portfolio of economy and midscale hotels, to cater to the everyday traveler and a growing global middle class. Wyndham is currently the largest U.S-based hotel company in China with more than 1,300 hotels and expects to hit more than 2,000 hotels in country by the end of 2019. Globally, the company offers more than 8,000 hotels across 77 countries under 18 brands.

“China remains a high-growth market for Wyndham and our success is a testament to the global power of our brands and the increasing influence of our class-leading loyalty program,” said Leo Liu, president and managing director for Wyndham Hotel Group in China. “In a little over a decade, we’ve established ourselves as a key player in the country—opening on average more than five hotels weekly and enrolling nearly 1,000 new Wyndham Rewards members daily.”

Originally launched in 2004, Wyndham Rewards was completely re-imagined in the summer of 2015 and has since become recognized as the industry’s leading hotel loyalty program. Built to be simple as well as generous, it’s the first program of its kind to offer members a guaranteed 1,000 points with every qualified stay and a free night at any of more than 8,000 hotels for a flat rate of just 15,000 points per night.

“Wyndham Rewards re-thinks what a hotel loyalty program can be and instead of gimmicky tricks, focuses on delivering meaningful and attainable rewards to our members, no matter where they are in the world or how frequently they’re able to travel,” said Noah Brodsky, senior vice president of Worldwide Loyalty and Engagement at Wyndham Hotel Group. “We’re making travel accessible to all and as our largest market outside North America, our members and our hotels in China are helping lead the way.”

Rapid Expansion: 2,000 Hotels by End of 2019
With more hotels than any other company in the world, Wyndham continues strategically expanding its global footprint through focused development efforts, the introduction of new brands and the help of key in-market partners.

With an expectation of 2,000 hotels open in China by the end of 2019, the company plans to introduce two new brands to the market later this year, including its award-winning, midscale Wingate by Wyndham brand and its city-centric, lifestyle-based TRYP by Wyndham brand. Complementing brands like Super 8, Wyndham, Howard Johnson and Ramada—all of which already have a substantial presence in China—the two additions bring the company’s total number of brands open or under development in the country to 11.