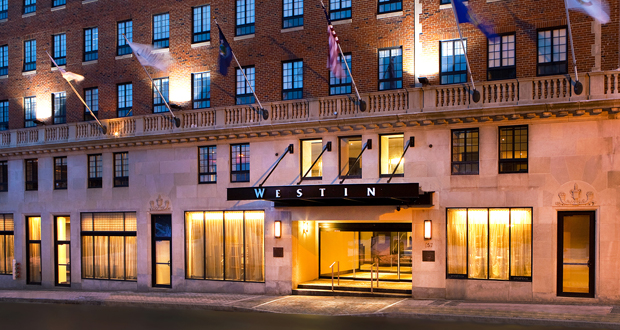 PORTLAND, Maine—Celebrating 90 years since Governor Richard Brewster opened the doors and threw away the key, the Westin Portland Harborview, a Rockbridge portfolio hotel managed by New Castle Hotels & Resorts, launched a summer-long series of commemorative activities—from Governor Paul R. LePage recreating the time-honored gesture of the key toss, to committing to performing 90 good deeds in appreciation of the city and its neighbors.

Governor Paul R. LePage, along with hotel General Manager Jeffery Burrell and Nat Thompson a great-grandson of the hotel’s founder Portland business owner Henry P. Rines, hopped a ride to the waterfront in a Gatsby-style vintage 1933 Packard to toss a commemorative key (made from fish food) into Casco Bay. Hotel industry tradition suggests that because hotels are always open to travelers, they don’t need to lock their doors. Throwing away the key symbolizes a wish that the hotel will remain open for all time.

“Historic hotels like the Westin Portland Harborview played an important role in the evolution of the city and it’s important to honor that contribution, share the memories, and tell the stories,” said Burrell. “Our tribute is a nod to the past with contemporary twists that we think today’s guests will appreciate.”

To demonstrate its appreciation to the city of Portland and its neighbors, Westin Portland Harborview will perform 90 good deeds, large and small. The hotel team launched the effort recently by volunteering time at the Milestone Foundation and participating in a community clean-up, in conjunction with the Maine Innkeeper’s Association.

“We think that every day should include some measure of surprise and delight, so we will be on the lookout for opportunities to do good deeds. Among our core values is a genuine commitment to serve our world. We are honored to preserve the heritage of hospitality that our building represents and strive to continuously give back to our community.” said Burrell. “A 90th anniversary is a noteworthy milestone in the life of any business, so we’re taking the opportunity to celebrate with the people that made it possible – our Portland neighbors, our guests and our associates.”

The hotel also has an exhibit located in its lobby that chronicles its history from groundbreaking in 1925, when the Rines family set out to build New England’s largest hotel, to its restoration in 2013 by current ownership group Rockbridge Capital. The display is enhanced by a Jazz-era soundtrack curated for the occasion.