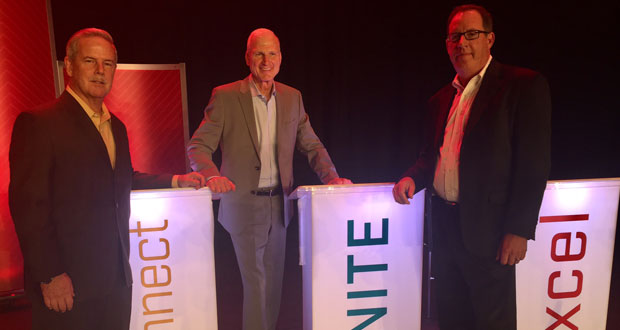 Several years ago, Vantage Hospitality Group looked at Red Lion Hotels Corporation (RLHC) as a possible acquisition. At the time, it wasn’t the right fit—Vantage did not have the wherewithal to acquire a public company like RLHC, according to Roger Bloss, founder, president, and CEO of Vantage.

In time, Vantage saw RLHC as a worthy partner that could help Vantage in the areas Bloss felt it was struggling—advancing technology and excelling in the upscale space. Particularly with consolidation like the Marriott-Starwood megamerger, Bloss said Vantage needed to respond to owner concerns about remaining stagnant.

“We had some hurdles we couldn’t overcome as an independent company. We were a major league team in a very small market. We were on the field, but we weren’t winning a whole lot of battles,” said Bloss.

At last year’s Lodging Conference, Bloss went up to Mount with the proposal to join forces, and just a year later, on Sept. 30, 2016, RLHC announced it closed on the acquisition of Vantage. The company gained 1,000 franchise hotel agreements nationwide in the process.

The Vantage Conference this week in Las Vegas, held in conjunction with RLHC, carried the theme of “Connect, Unite, Excel.” The conference sessions focused on changes and improvements coming in 2017 as a result of the merger, with executives Bloss, Mount, and Bernie Moyle, COO of Vantage, working to answer owner questions and concerns about the major move.

“When we looked at Vantage, we said this group of people really achieves amazing things and really sets the tone in the industry, particularly in the economy and midscale space,” Mount said of the acquisition. “Additionally, we felt that the team gave us a really strong foothold in the economy space, and would allow us to further grow the midscale, upscale space. Most importantly, it gave us the scale ubiquity to really leverage some of the technology platforms and innovations that we’ve developed, and bring them across the U.S. in a more formal way.”

Moving forward, the Vantage name will be phased out of internal and external communications, but will not be removed from existing physical signage. New properties added into the system, however, will no longer bear “By Vantage” in their name.

The executives noted they are still in the process of discussing potential brand consolidation, and would be looking to members during the conference to hear where owners would like to see the company’s focus turn to in the future. As of right now, major priorities are on enhancing Hotel RL as an upscale, boutique brand and making Signature Inn an affordable boutique offering. According to Bloss, owners of the 3 Palms brand properties will likely choose another brand to move to as it is eventually phased out. Additionally, Settle Inn will move from the midscale space into the upscale space.

The team noted “17 in 17” as this year’s goal—achieving 17 percent growth in overall revenue in 2017. “We are so excited about this toolbox we uncovered with RLHC, and we think it’s a goal that we can achieve with the multiple brands,” said Bloss.