Well, there’s something to be said for simple things done well—a delicious meal, an outfit that flatters in all the right places, or parallel parking in a tight spot on the first try. Just thinking about any of those scenarios can make a person feel all warm and fuzzy inside. A perfect hotel stay, too, can bring these feelings, regardless of whether they’re staying at a luxury or economy hotel.

Like other industry segments, economy hotels are thriving in the current lodging atmosphere. Big hotel companies are working hard to ensure their economy brands are set up for success, and practiced economy hoteliers are taking advantage of the industry’s growth to elevate their properties and their guests’ experiences. Each brand has its own approach, but a common thread runs through it all—they have to deliver the basics, and they have to deliver them well.

LODGING recently spoke with some economy experts about their recent experiences with the segment—what works, what doesn’t, and what the future holds for these hotels.

Doug Collins, CEO of Hospitality Lodging Systems, a company that offers three economy brands—Budgetel Inns & Suites, Haven Hotel, and AmeriVu Inn & Suites—has been working in the economy hotel sector for 35 years. He says that the staying power of economy brands and economy properties is tied to the segment’s loyal traveler base. “There are consumers out there, like traveling salespeople, budget-conscious leisure travelers, and contractors, who are loyal customers of economy hotels,” he says. “And while the economy is doing well right now, there are always—and will always be—those customers.”

Mike McGeehan, chief development officer at G6 Hospitality, parent company of the Motel 6 and Studio 6 brands, adds that economy hotels are better prepared than midscale and even upscale segments for a potential downturn. “Typically, the economy lodging segment weathers downturns better than the higher-end brands because of the segment’s business model,” he explains. “Speaking to our model in particular—we’re able to really focus on keeping expenses low, and reducing them as needed to help our owners and franchisees see a positive return. We’re still able to make money at the end of the day.”

According to STR’s 2019 U.S. Pipeline Summary, 17.7 percent of the industry’s existing supply is in the economy sector. However, the segment only encompasses 3.8 percent of the properties in the total U.S. pipeline. G6 president and chief operating officer Greg Juceam notes that this could be because midscale and upscale brands are in stiff competition for the most market share. STR’s numbers back this up: Midscale and upper-midscale properties comprise 21.9 percent of U.S. supply. “There’s this escalation happening—everyone is trying to outdo each other. Ultimately, that’s good for the guest, because there’s more and more being offered in the room. But, it may not be great for is the owner, because they might not be able to get a return on that room,” Juceam says.

Juceam adds that the number of pure economy rooms on the market is dropping because many hoteliers are either taking economy properties offline or converting them to meet midscale or even boutique standards. “There’s actually less competition in economy right now. It’s good for us, because we have a bigger presence in the space and are able to focus on delivering that economy experience.” Again, what Juceam says reflects STR data. The company’s January 2013 to December 2019 Economy Class Trend Report shows that economy segment supply is slowly decreasing, though the drop is less than 1 percent each year.

Just because the number of economy hotels is dropping in the United States doesn’t mean that the segment is going anywhere. “Economy hotels will adjust to the market, just like all the other sectors in the hospitality business,” Collins says. “The assumption or the projection that economy hotels will become less relevant, in my mind, is grossly inaccurate. As long as the product remains competitive, clean, safe, comfortable, and affordable, economy hotels will be relevant.” 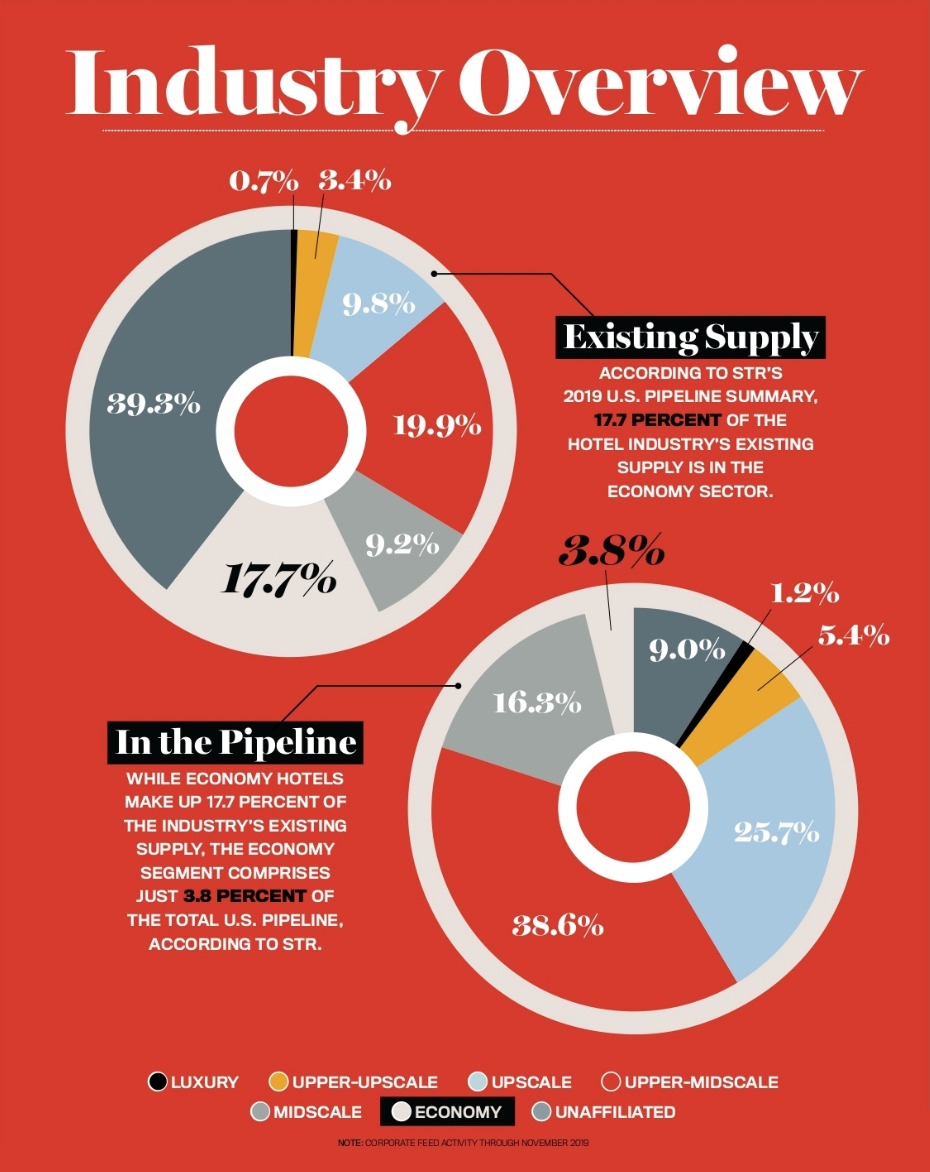 Collins hits on another trend documented by STR. Occupancy, average daily rate (ADR), and revenue per available room (RevPAR) have all increased year-over-year in the economy segment. Year-end data for 2013 shows that economy hotel occupancy was at 55 percent, ADR was $61.71, and RevPAR was $34.31. Year-end 2019 numbers show occupancy of 59.4 percent, ADR of $74.24, and RevPAR of $44.13.

Collins adds his own anecdotal evidence. “Many of our hotels enjoy outstanding occupancy because they provide that service and there’s a market out there. Now, the chains may not grow by leaps and bounds, but many of the economy hotels have joined smaller brands or have become soft brands, or become independent because they don’t need the large travel club.”

McGeehan sees the same thing, and says that G6 has had more and more hotel developers with existing portfolios—but no economy hotels—reaching out about franchising opportunities. “One of the more exciting things we’ve been experiencing is that we’re now attracting more hoteliers who typically had only played in the higher-end segments, but really see the value in diversifying their portfolios with the inclusion of an economy lodging brand.”

While they might not be the flashiest properties, economy hotels are reliable money-makers for their owners, and, by extension, their franchise companies. This is both related to the high RevPAR many of these properties offer, as well as the fact that owners aren’t taxed by the need for high-end amenities. “Just like customers, owners of economy hotels only want to pay for things they need,” Collins says. “Many of the economy brands out there are built to deliver this owner experience. This is why you don’t necessarily see many economy hotel owners going into that mid-price or being envious of that price. I think they’re happy where they are.”

Phil Hugh, chief development officer for Red Roof, notes that much of his company’s strategy is centered around increasing profits for owners. “It’s all about driving top-line revenue for our franchisees. We talk about consistent quality because we want them to make more money,” he says. Hugh adds that Red Roof is hosting five Revenue Generation Summits in 2020 to help owners accomplish this goal. “We’re going to help our owners get to the summit of driving revenue. We’re starting out with that base camp and going all the way to the top of the mountain, talking about what you need to do to drive revenue and ensure your properties’ success.”

While each economy property has its own challenges and amenities, there is one thing that all economy properties must offer, per the experts: consistency. “Consistency is what it’s all about,” says Andrew Alexander, president of Red Roof. “The consumer in the luxury space worries a lot less about consistency than the consumer in the economy space. Why? Because the luxury space usually is consistent and if it’s not, it’s inconsistent in a positive way. Whereas the economy segment is often inconsistent and when it is inconsistent, it’s usually in a negative way.”

Alexander explains that consistency in delivering the basics has been the main goal of Red Roof, especially through the development of its Red Roof PLUS+ brand. “Think about the basics—clean, comfortable, and probably, most importantly, a staff that really cares about guests and cares about catering to their needs—that is what we must deliver. Sometimes we forget. We focus too much on technology and amenities when we really need to be focused on the people and the service they provide.”

Consistency was also a major sticking point for G6 in recent years, not just to appeal to clients, but also to bolster owners. “Consistency was something we knew we needed to focus on. This past year, we completely rewrote and simplified our brand standards and our audits so that our owners understand what our expectations are. This led to the removal of the bottom 10 percent of our portfolio. While this was difficult, it ultimately benefits the other 90 percent of the owners who are really pushing the brand forward,” Juceam describes. “We’ve just really focused on ourselves to some degree, ignored all the noise, and ultimately the results are showing.”

The Future of the Economy Space

Looking ahead, the experts all predict that economy will remain strong and continue to evolve to meet new needs. Many economy brands have developed new construction prototypes, and more economy brands are crossing over into the extended-stay segment. Red Roof specifically has been looking to take advantage of opportunities for economy properties in the extended-stay segment, which is why it launched a new brand in April of last year. The brand, HomeTowne Studios, caters to guests looking for long-term lodging. “I think all economy hotels are becoming more focused on this long-term guest,” Alexander says. “Traditionally, we may think of extended stay as encompassing full kitchens and all of the amenities they may get at home, but sometimes people aren’t looking for that. They’re more focused on lower weekly rates.”

Alexander adds that hotels catering to these types of guests have lower operating costs and bigger margins for owners. “I think you’re going to see this type of extended-stay model spread to all segments,” he says. “But for now, we’re just seeing it experimented with more frequently in the economy segment.”

This article originally appeared in the March 2020 issue of LODGING.