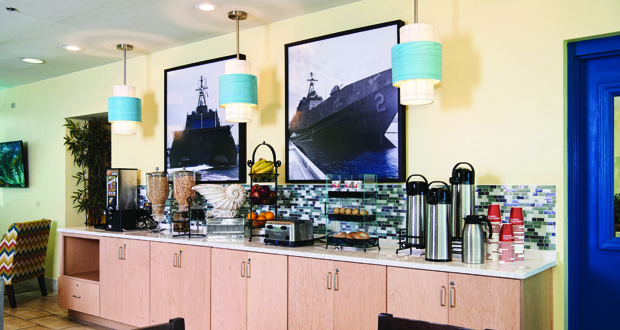 Despite the “ready for anything” approach that permeates the hospitality industry, many hotels do come to specialize in the types of guests that most often frequent their properties. Hotels near convention centers develop strategies to better serve business travelers. Roadside properties may become especially adept at turning rooms quickly early in the morning when their guests move on. But one category of U.S. hotels has taken this specialization to the next level—military properties.

These on-base hotels cater specifically to service members and their families, accommodating people who are traveling on official military business, service members in the midst of a permanent change of station (PCS), veterans, and people visiting family who are on base. And this is not a small group of potential hotel guests. According to the Defense Manpower Data Center (DMDC), as of June 30, 2017, there were 1,127,831 active troops serving in the U.S. military. And, according to U.S. Census data, there were an additional 18.5 million veterans in the United States in 2016.

As LODGING delved into the world of military lodging, it quickly became apparent that the service culture at these properties is very focused on not just providing an excellent stay, but specifically serving men and women in uniform. There are many systems in place, from specialized training programs to partnerships with organizations like the American Hotel & Lodging Association, that help them achieve these goals. But to understand how these hotels accomplish all that they do, knowing how they’re run is critical.

The Properties
There are five branches of armed services in the United States: Air Force, Army, Coast Guard, Marine Corps, and Navy. Four of these branches have their own branded on-base properties: The Air Force has Air Force Inn; the Army has Army Lodging and IHG Army Hotels; the Marine Corps has Inn of the Corps and Marine Transient Lodging; and the Navy has Navy Lodge and Navy Gateway Inns & Suites.
While branches of the armed services may work together and enter into partnerships, they are also responsible for managing their own lodging programs and ensuring they follow the applicable laws and policies. Mike Barber, lodging program manager in the business and support services division of Inn of the Corps, explains, “The Office of the Secretary of Defense provides policy and governance across all categories of business and morale, welfare, and recreation (MWR) programs, which include Military Exchange Systems, lodging programs, and MWR and family programs.”

As it stands, most of the lodging enterprises associated with the U.S. Armed Forces are run by their overseeing branch of the military. The exception is the properties associated with the Army, which decided to privatize its lodging operations. The Army started soliciting for contracts in 2005 and awarded the coveted deal to Nashville, Tenn.-based developer, owner, and asset manager Lendlease in 2006.

Gretchen Griffin, general manager of lodging for Lendlease, describes the reasoning behind the Army’s move. “The study the Army did of their lodging facilities in the late 1990s and early 2000s showed that they needed more than $1 billion to recapitalize and renovate their properties. They simply didn’t have the funds to sustain a program that met those needs. In addition, operating hotels was not a core function of the Army, so that’s why they decided to privatize.” The Privatization of Army Lodging program, or PAL, now encompasses properties on 40 installations in the United States, including Puerto Rico, Hawaii, and Alaska.

She adds, “Lendlease has been a strong partner in the housing privatization aspect of the Department of Defense (DoD) across all branches of the military for some time, overseeing more than 40,000 homes for service members and their families. It was a natural progression to enter into the hotel space.”

While Lendlease owns the Army properties, they don’t manage them. For that, the developer partnered with InterContinental Hotels Group (IHG). Together, they created IHG Army Hotels. “We’re currently in our eighth year of operation,” Chuck Sourbeer, head of operations for IHG Army Hotels, says. “In that time, we’ve flagged many of the existing Army properties with IHG brands, and built new Candlewood Suites and Staybridge Suites on certain bases.”

Sourbeer does note, however, that while well-known IHG brand names such as Holiday Inn Express or Staybridge Suites aren’t on every Army hotel, all properties are branded as IHG Army Hotels. “PAL is a $1 billion project—we’re making progress, but we haven’t rebranded every property yet.”

While Air Force, Navy, and Marine Corps lodging programs are overseen by their respective branches of the Armed Forces, some hotels use government funding, while others operate on a for-profit model like the ones on Army Bases. For example, Navy Lodge properties operate under the Department of the Navy’s Navy Exchange Service Command (NEXCOM), but they are independent entities meant to be self-capitalizing. “Navy Lodges are not funded with taxpayer dollars,” Mike Bockelman, vice president at NEXCOM and director of the Navy Lodge Program, says. This is not the case for the Navy’s other lodging program, Navy Gateway Inns & Suites, which do require government funding.

What Are They Like?
While each branch of military hotels has to answer to different overseeing entities, they all share qualities with each other and the lodging industry at large. They offer a variety of room types, including suites, as well as the typical services a guest might find at a branded hotel anywhere in the country.

Barber describes the type of amenities offered by Inn of the Corps properties, which are meant to deliver on the brand’s promise of “Clean Crisp Service.” “The hotels have daily housekeeping service, a full line of bath amenities, and most locations offer a complimentary hot breakfast and guaranteed reservations,” he notes.

Rooms at Navy Lodge properties adhere to a standard configuration, as well as a high-level of guest services and cleanliness. “Additionally, all family suites and guestrooms are oversized with fully equipped kitchens to accommodate a relocating family who may have to stay at the property for several days or weeks while awaiting housing assignment or arrival of household goods,” Bockelman describes, adding that the only major factor that sets a Navy Lodge property apart from most other hotel properties is that the majority of the hotels’ guests are military personnel fulfilling a military mission requirement. Additionally, Navy Lodge properties are designed to reflect their local area and culture, much like other major hotel brands throughout the globe.

Army properties are the only ones that operate under brands seen in civilian lodging. Through PAL, Army properties in the United States have been rebranded as IHG hotels, including Staybridge Suites, Candlewood Suites, and Holiday Inn Express. They also have the Historia Collection, encompassing what Sourbeer calls “distinguished visitors’ quarters.” “This is where we generally house any high-ranking individuals staying at our properties,” he describes.

IHG Army Hotels have to meet IHG brand standards, and Griffin adds that these properties also offer enhanced amenities to better serve the military clientele. “At the new Staybridge Suites Fort Belvoir, we have a children’s media room, as well as several other meeting rooms that can accommodate families who might be staying at the property while visiting the new VA hospital across the street from the hotel. We also do things like host socials and offer shuttle services.”

How Do They Operate?
Military hotels are run a lot like civilian hotels, but there are some differences. First is the way they recruit and train team members. Many military properties make a concerted effort to employ people who are somehow affiliated with the U.S. Armed Forces. “Over the past eight years, IHG Army Hotels has really mastered the art of hiring people who have connections to the military. The spouses, sons, and daughters of enlisted soldiers make up a large segment of our team,” Sourbeer says. “This works really well, because when a soldier and his or her family experience PCS, chances are there will be another IHG Army Hotel on their next installation. They already are familiar with our system and have been trained on our operational procedures. We work very hard to hire transfers when position availability allows. In fact, many of our current managers are the spouses of active duty troops.”

Sourbeer also notes that having staff who understand the trials and tribulations associated with PCS and moving at these hotels helps ensure that guests feel at home. “They get it. They’ve done it.”
Military hotels are also unafraid to tap into the expertise and scale of the U.S. lodging industry. IHG Army Hotels is the obvious example, but the other brands are quick to mention their reliance on organizations like AHLA and AHLEI for training and industry certification, as well as lessons they can glean from the big brands. “Learning from the major players in the hotel industry is key to our success,” notes Bockelman.

Inn of the Corps uses many of the same supply channels as civilian hotels, but, according to Barber, the method by which they procure supplies is different. “Our procurement process is regulated by the Non-Appropriated Fund Procurement Policy,” he notes. This policy ensures that purchases of goods and services for DoD personnel and their families is for their benefit and funds are not misappropriated.

Taking Care of Service Members
Though military hotels encompass a wide variety of properties that are overseen, funded, and oftentimes operated in very different ways, there is one factor that ties them all together—the deeply rooted desire to serve those who serve. “Serving the men and women of our military is an experience that lives with you always,” Bockelman says.

Barber, too, mentions the pride that comes from serving this particular population, “We are extremely proud of our brand, our program, and most importantly, our dedicated hospitality professionals that take such great care of Marines, sailors, and their families every day. It takes dedication and a certain type of personality to provide exceptional service in the hospitality business.”

Sourbeer adds, “You have to be passionate about what you do. These are the men and women who are protecting our country, and we have a mission and desire to take care of them. Having a passion for our customers is a critical factor in U.S. Military lodging success.”