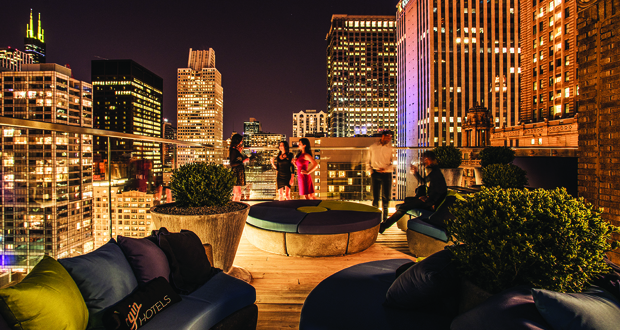 When approached correctly, the lodging industry can be an extremely lucrative business. Newcomers are entering this space all the time, coming from other industries and leveraging their existing business acumen to bring new ideas and properties into the fold. Many of the businesses branching out into the hotel industry bring with them an existing brand identity, which they are in turn using to attract their existing customers. Keeping this in mind, it may come as no surprise that three relative newcomers to the hotel business have their roots in music, which has always been a powerful aspect of socializing and otherwise connecting with friends and family.

So, what exactly is bringing in those previously otherwise engaged into this space now?

Perhaps from the vantage point of being the longtime CEO of a hospitality empire that began as restaurant chain named after Jimmy Buffett’s “Margaritaville,” Cohlan, sums it up in a single word: Fun. “The hospitality industry is magnetic because, like Margaritaville, it’s all about fun! People from around the world continue to travel, and travel continues to be the number one thing people desire to have more of in their lives,” he asserts.

Leal describes Virgin’s own gravitation to the space as “a natural extension of an already strong relationship with a loyal customer base” coupled with a desire to connect with them outside the typical social media space. “Virgin was already a travel and lifestyle company with planes, trains, and health clubs. We had a significant and loyal consumer following—50-60 million global customers.”

Roca, too, mentions how this particular industry enables his company to enhance its relationship with its customers in a more intimate way. “Brands can build stronger ties with consumers through comprehensive experiences. The drive to curate a guest’s experience in the hotel industry—for example, meet their leisurely needs and provide an unparalleled stay—all tie into this industry’s concern for the happiness of consumers.” He also notes that the hospitality industry offers those who invest in it the ability to capitalize on real estate. “You can build up, rather than out.”

Not that the plunge is seamless. Leal spotlights a challenge that faces many—including established hotel brands—especially when venturing into the so-called lifestyle segment: customer confusion. “We’re segmenting the business so much with so many different locations and so many different products, the consumer doesn’t know what to expect when going to a new product, or even an old product that is trying to change by labeling itself ‘lifestyle.’”

Possibly related to that confusion, says Cohlan, are what he terms “challenges related to supply, demand, and the potential cannibalization of brands that could come from further consolidation.” He suggests there is far less confusion with strongly branded properties like Margaritaville. “We bring a unique lifestyle concept and selling proposition to owners that is not in conflict with their existing portfolio.” That lifestyle concept, which focuses on fun and relaxation in line with Jimmy Buffett’s song, apparently boils down to a sense of place that has the potential to attract would-be beach bums of all ages, although the traditional fan base is Buffett’s contemporaries, baby boomers.

Like Margaritaville, Hard Rock’s strongly defined fan base, too, creates expectations, which the enterprise strives to meet and surpass.

“As an experiential brand, key differentiators of Hard Rock International are our signature guest experiences, which we create to ensure we stay ahead of industry trends. Yet, as Roca observes, it’s not enough to give their customers the ultimate rock music experience; like properties of all descriptions, they must keep pace with technology. “With technology evolving at such a rapid pace in today’s society, this can definitely pose a challenge for brands and companies to hit the perfect balance of staying up to date with technology, while maintaining the right amount of human touch and interaction.”

Cohlan, Roca, and Leal are optimistic about the viability of lifestyle properties in particular, especially those that know their customers and what they want and expect. They describe their respective approaches to creating a stronghold for themselves in the current environment.

Cohlan calls “authenticity” a key ingredient in the success of lifestyle brands such as Margaritaville, especially as others flock to the space. Observing that lifestyle and entertainment-centric resorts are expected to see strong growth as a result of continuing demand from the public, he says, “We’ve seen that the Margaritaville lifestyle translates into virtually every destination, and resonates with virtually every demographic.” Nevertheless, Cohlan says the company is not resting on its laurels. “We continue to create new and exciting ways for people to engage with our brand. We even launched a College Ambassador Program last year to connect to our younger fans, who are just as passionate as those who grew up with the song.”

Similarly, Roca believes Hard Rock is poised for a bright future by focusing on its “key differentiators,” mainly melding music and technology, for an “unparalleled hands-on musical experience,” which, he says, extends to spa services. “Traditionally, spa services require guests to unplug and ‘disconnect’ from technology; however, Hard Rock has evolved its music-infused spa menu alongside our society’s obsession with technology, inviting spa-goers to plug in, amp up, and turn on with its key differentiator—music.” Guests, he says, are urged to “Live Hard, Purify Harder” with the help of spa treatments that use vibrations, pressures, and patterns as their foundation. For a rock star experience via interactive programming, guests can choose from a menu of 20 Fender guitars, which are delivered to their room, complete with an amplifier and premium headphones. Devotees of traditional vinyl can, as Roca puts it, “experience music as it was intended to be listened to”—spinning on a Crosley turntable. Another unique perk is called Sound tracks; it enables guests to experience each destination like a local through the lens of their favorite artists and tastemakers.

Unlike Hard Rock, with its longtime rock-and-roll association, and Margaritaville’s images of good times, Virgin’s foothold in the lifestyle segment is more subtle. While there is no theme, per se, Leal says Virgin’s own efforts to both differentiate itself in this segment and establish its prized “favorite” status has been a total overhaul of the hotel guest experience.

“For us, it’s not just about having a better design—which we’ve accomplished, according to our consumers—but conveying what it feels like to be there. Anyone can copy some of the design innovations we’ve implemented, but the question is: What is the brand proposition behind it?”

That brand proposition, Leal says, is making guests feel like they are members of a club—using the tag line “members without dues.” It also aims to make them feel like they have been heard. Rooms are designed for how guests today like to use them—to work, socialize, and relax. They also take aim at some of the things customers don’t like about hotels—hidden charges, restrictive rules, and inflated mini-bar prices.

“Our proposition is overarching: There is no nickel and diming, no surcharges, no charge for late checkout or early check in, no limited stays, no minibar restocking fees, and pricing of mini-bar items is reasonable,” Leal describes, adding that the “member without dues” concept is meant to give guests the feeling of being part of something bigger, not just a transient hotel.

Describing their progress, all discussed their growth in terms of adherence to their plans and goals, and their faith in the future of their brands.

For Hard Rock, it’s always about the music, says Roca, “By staying true to our musical roots and infusing music into the guest experience, the brand has excelled in every region and destination it’s in.” According to Roca, what began as a small cafe in London in 1971, has grown to “one of the world’s most globally recognized brands with venues across 75 countries—including 176 cafes, 24 hotels, and 11 casinos.” Within the past three years alone, he says, the size of the brand has doubled, with numerous projects still in the pipeline, and more likely to emerge. “We’re always on the hunt for new, exciting destinations to bring our rock star vibe to and look forward to staying in the forefront as the premier music-lifestyle brand in the hospitality industry.”

Describing Margaritaville’s expansion during the past five years as “incredible,” Cohlan says prospects for life in Margaritaville appear to be very good indeed. “From new active adult communities to college kids looking to be part of this phenomenon, and a roster of outstanding hotel and resort partners, we know we are going to be not-so-quietly making noise for years to come.” In addition to the nine destination resorts and hotels across the Southeast United States and Caribbean that already exist, he says an aggressive growth campaign already includes properties upcoming in Orlando, Gatlinburg, Nashville, and the Caribbean. He says that opportunities for growth domestically and internationally are not limited to the coastal regions that would be a natural fit for the brands. “We are also seeing opportunity in unique metropolitan areas, including New York, Chicago, and Los Angeles, as well as areas
of Texas, such as Dallas, Galveston, and
San Antonio.

Leal says Virgin’s objective was “never to have 2,000 hotels seen as a commodity” or to just use a different sign to place their hotels in the lifestyle segment. “We wanted to have 20 to 30 hotels globally in key cities, secondary markets. We wanted to differentiate ourselves like everything Virgin does, not by being the biggest, but by being a consumer favorite.” These objectives, he says, have been achieved by sticking to that plan. Leal says Virgin continues toward its goal of expanding globally, spurred on not only by customer feedback but by “official” stamps of approval, including the Conde Nast consumer award for best hotel for its Chicago Hotel, which was ranked number six in world. “We are going at great pace in terms of what we want to accomplish. We are very excited about the fall opening of our next hotel, which is south of Market Street in San Francisco.” He says progress is being made on other properties, including in New Orleans and Dallas.