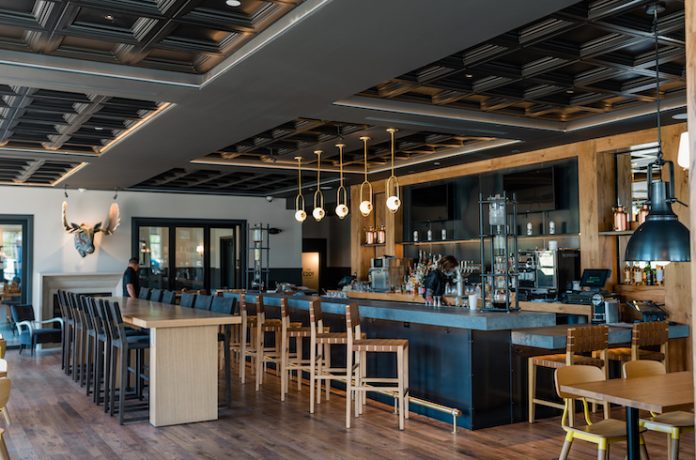 GOLDEN—The Eddy Taproom & Hotel, located where the Great Plains meet the Rockies in Golden, Colorado, recently opened. Managed by Denver-based CoralTree Hospitality Group, The Eddy experience is inspired by the region’s mining history and surrounding outdoor adventures. Named after the river respites where kayakers and whitewater rafters rest and relax, The Eddy Taproom & Hotel is a confluence of outdoor pursuits and lively, comfortable service.

“Everything about The Eddy is a nod to the region’s history and the outdoor lifestyle that Golden is known for,” said John Drugan, general manager of The Eddy. “We are so excited to welcome guests to The Eddy with all of its unique offerings from Truck Eddy to The Taproom and the creative service programming that we’ve developed to provide even more value to the guest experience.”

Located near Golden’s Clear Creek, the 49-room boutique hotel is situated on the site of the old Golden Fire Brick Company. With Truck Eddy, The Taproom, two rooftop patios, and walking distance to outdoor pursuits, The Eddy is a gateway to Golden and the Colorado Rockies.

The property has several creative programs that reflect the spirit of the area. The Taproom’s 100-Mile Cocktail program only highlights ingredients that were produced within a 100-mile radius of the hotel. An example: the Gin & Jam cocktail features Denver’s own Family Jones House Gin, High Altitude Kombucha out of Golden, and Palisade Peach Jam.

Enjoying a cocktail by one of the hotel’s firepits has a new flavor with the hotel’s popcorn cart. An alternative to s’mores around the fire, reservations can be made to have The Eddy’s popcorn cart swing by to pop the corn over the fire, and guests can select from a variety of sweet and savory items such as garlic and black paper or cinnamon and sugar to make their own custom mix.

The Eddy also has partnered with Rise Yoga in Golden to develop a series of relaxation videos that feature breathing techniques and relaxation methods as part of the hotel’s Rise & Relax program. Guests can access these relaxation techniques via a QR code in their room to wind down. Rise also will be offering complimentary yoga classes at The Eddy.

The four-story hotel is located on the site of the old Golden Fire Brick Company that dates back to the 1860s. The Eddy has the look and feel of the original brickwork exteriors that blend both a historic and industrial atmosphere. The interiors are a mix of contemporary and vintage to create an authentic local aesthetic that welcomes guests to stay the night or enjoy a pint at The Taproom.

Truck Eddy, the property’s food truck, has a selection of barbecue and shakes that can be enjoyed on nearby picnic tables, on the outdoor lawn, or in the comfort of a guestroom. The Taproom offers a menu that focuses on seasonal, Rocky Mountain local ingredients paired with any of the eight craft beers on tap. Three signature beers are being brewed for the Eddy’s taps including a pale ale from Denver-based FlyteCo Brewing. The Taproom also will offer a drink program featuring barrel aged and smoked cocktails, as well as drip infused creations using a cold brew coffee Yama Tower.

The dog-friendly Eddy also welcomes four-legged guests to stay and play at the property. While on-property, dogs receive an Eddy bandana and can sample the special Pup Shake from Truck Eddy made with peanut butter, whipped cream, and a dog treat.

The property also offers a fitness center and two rooftop patios with views of the surrounding mountains. For groups, meetings, and social functions, the property offers flexible, customized space for intimate gatherings and relaxed meetings.