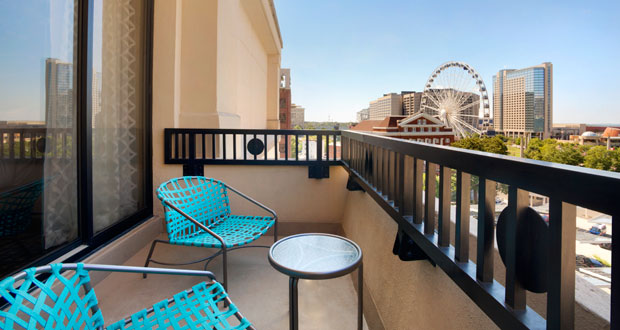 ATLANTA—The American Hotel, downtown Atlanta’s first modern hotel, has been restored to its original glory as a DoubleTree by Hilton property. Ahead of its time when it opened in 1962, the hotel played an integral part in the Civil Rights Movement, welcoming all guests. The American Hotel hosted notable public figures such as Elvis Presley, Carol Channing, Jimmy Carter, James Brown, Nelson Rockefeller, and Dr. Martin Luther King Jr.

The $16 million renovation of the 315-room hotel embraces mid-century modern furnishings and design paired with first-class service and amenities, such as the signature, warm DoubleTree Cookie. Unique features include vintage mini fridges, 60’s car-themed headboards, and an Airstream trailer serving as the poolside bar. The hotel’s renovated meeting and banquet space can accommodate groups of up to 500. High-tech fitness facilities include WELLBEATS virtual fitness classes where participants can engage with world-class instructors in a live class experience. 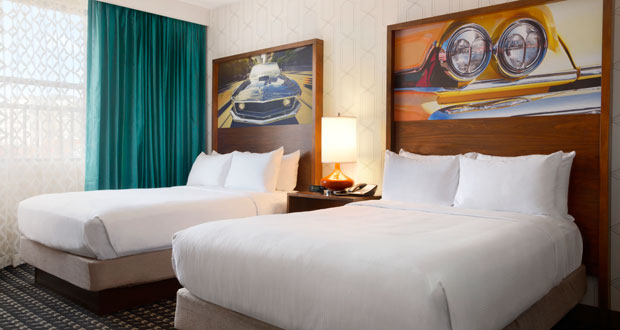 “Legacy Ventures has re-energized an important part of our city’s downtown fabric,” said Legacy Ventures’ Chief Operating Officer Kevin Richards. “Our focus has been to create state-of-the-art hotel and restaurant guest experiences while honoring The American’s storied history. This project has sparked a high level of enthusiasm with our team, and we are confident our guests will love the revamped look from the moment they walk in the door.”

The property is also home to The Cloakroom Kitchen & Bar, which pays tribute to the Cold War. Guests can sit back and indulge in classic craft cocktails and bar bites surrounded by images of Kennedy, Khrushchev, and other period figures.

The American Hotel is situated next to the renowned Tabernacle concert hall and directly across the street from wholesale trade center, AmericasMart. The hotel is a short walk across Centennial Olympic Park to the Georgia World Congress Center and the new Mercedes-Benz Stadium, and just one block off the Peachtree Street business district. The American Hotel is Legacy Ventures’ fourth hotel in the Centennial Park District and The Cloakroom is the firm’s 10th restaurant in the district.

Finance LODGING Staff - August 11, 2020
HENDERSONVILLE, Tenn. — The hotel industry has made promising weekly gains in occupancy since its low point of the COVID-19 pandemic, while short-term rentals...