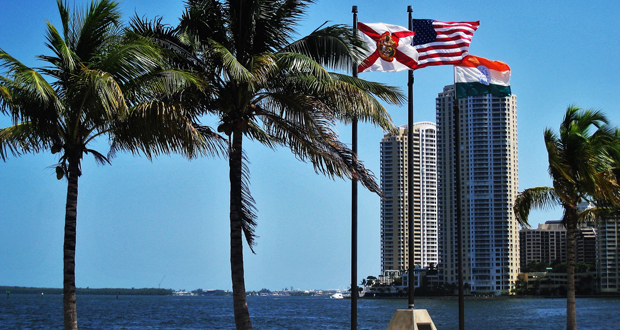 Hurricane Irma caused extensive devastation and displaced 6 million Florida residents. Businesses cycles were also interrupted in every major market by power outages—leaving 6.5 million people without power—as well as flooding and debris. The total economic cost of the storm is estimated at $100 billion, according to a report by Cushman & Wakefield on the destruction seen across Florida’s major cities and their surrounding areas.

The 425-mile wide, 130 mph category 4 hurricane stopped businesses in cities across the state. Ports were closed for four days, resulting in more than $800 million in lost revenue and diverting 31 cruise ships, according to the report. Because the storm happened over the weekend, office operations were unaffected until the weekdays arrived.

Jacksonville, which has high flood rates in its historic downtown area, made suburban areas operational within two days. The report sites that although some areas of that city are still flooded, the industrial market is seeing increased businesses from those looking for temporary spaces, such as relief organizations.

Miami also rebuilt heavy damages after the storm, according to the report. Areas experienced restricted access due to flooding, and two cranes had fallen on construction sites. Miami’s offices and workplaces saw limited power outages and a greater demand from logistics providers.

Broward’s mass flooding from the category 4 hurricane quickly receded so that suburbs were operational within three days after the storm. Warehouse rentals are searching for temporary space and there’s a short-term increase in demand for vacant land.

Other Florida cities had a much different experience. Palm Beach didn’t lose power in office buildings and suburbs were restored within three days, although public transportation and ports were temporarily out of service. Orlando mostly maintained power, but Port Canaveral was not operational for a week post-storm.

Although most Florida businesses were running normally by the end of the week, natural disasters like Irma–whether earthquakes, floods, storms, or tornados—continue to pose a significant threat to cities around the country and the world. Recent natural disasters may prompt businesses and residents to reevaluate their locations, which could ultimately lead to population shifts.

The report attributes Florida’s ability to rebound so quickly post-Hurricane Irma to the preparedness, collaborative effort, and resilience of the state, businesses, and residents. With 70,000 people sheltered in the storm’s aftermath, the state is working towards lessening that number in the coming months. While the recovery process may be a bumpy road, in the coming months, Florida will be on its way to a full recovery.

The Experience Economy Is Driving Investments in Resorts