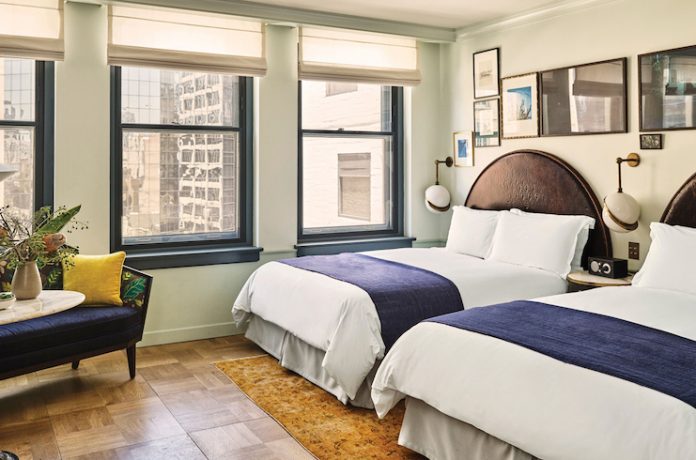 The development of the Hotel Per La in the Giannini Building is not the first conversion of this 12-story Neoclassical structure into a hotel: Back in 2018, the building became home to the NoMad Los Angeles. But this year, HN Capital Partners and Sage Studio have imparted their own design concept to the Giannini Building, which opened in 1922 as the Bank of Italy headquarters in the Financial District. The Hotel Per La replaces the NoMad hotel and features a new entrance and check-in experience, as well as new furnishings and light fixtures that add a contemporary California feel. The lobby and restaurant space, originally the banking hall, has a fully restored gold-and-blue Italianate ceiling and Corinthian columns. Original marble flooring discovered in the lobby area has been refurbished. Distinctive accents include antique Persian rugs and original artwork curated by Paris-based design studio Saint-Lazare. Guestrooms feature custom furnishings and Bellino linens. In addition, many guestrooms offer European-style bathrooms with Terrazzo-floored walk-in showers and pedestal bathtubs. Dining options include a forthcoming ground-floor restaurant and lobby café, as well as Bar Clara, servicing the rooftop bar and pool area with Mediterranean-influenced cuisine. Groups have 10,000 square feet of function space at their disposal.

George Seli
George Seli is the editor of LODGING.