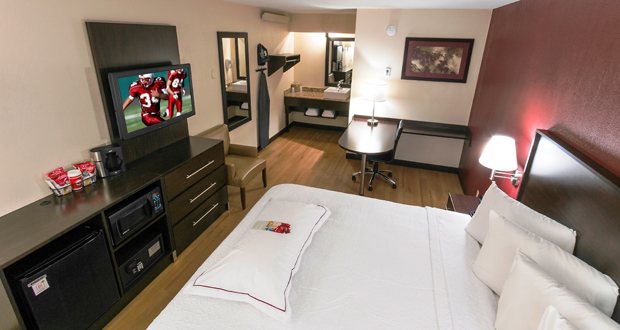 Red Roof CEO Andy Alexander knows a thing or two about TripAdvisor reviews. About 25,000 of them are delivered to his phone each year, he says. The website’s user reviews help many economy and midscale travelers determine where to book. Alexander says if you look closer, the reviews also reveal drastic inconsistencies in quality among economy properties, even those within the same brand.

“There’s a space between midscale and economy properties big enough that you could drive a truck through it,” Alexander explains. That space is what Red Roof has defined as the “upscale economy”—and it’s a void the company is looking to fill with its brand expansion, Red Roof PLUS+. In the years since its 2013 rollout, Red Roof PLUS+ has grown to make up about 10 percent of Red Roof’s total portfolio.

The PLUS+ concept started brewing well before its official launch. In 2010, Red Roof’s Columbus Hotel underwent a floor-by-floor interior renovation. After one floor was complete, the company would ask guests for feedback, and implement the suggestions in the next floor. After six floors, the end design featured more outlets, higher-quality bedding and furniture, faux-wood vinyl flooring, and spa-style bathrooms.

Upscale economy brands are responding to these kinds of consumer demands by pushing the economy segment into midscale, Alexander says. Several economy brands have taken note, adding amenities or upgrading guestroom design. Red Roof postures that PLUS+ goes beyond introducing more midscale amenities at some properties. The PLUS+ brand is aiming for guaranteed consistency between properties to clearly define the upscale economy category to consumers.

“There’s no reason why the economy segment should be as inconsistent as it is,” Alexander explains. “The PLUS+ brand has ultimate consistency, and assures guests that they’re going to get the exact same clean, comfortable room at every property.”

Red Roof is aggressively occupying this niche. At the end of 2016, when the company celebrated its 500th U.S. hotel opening, it also crossed the threshold for its 50th PLUS+ property. Red Roof is building towards having PLUS+ account for as much as 20 percent of the total Red Roof brand. Franchisees are also getting onboard with the push, Alexander says, attracted to the opportunity for higher ADRs in an economy market.

“The percentage of franchisees interested in plus has certainly increased over the last couple years as they’ve seen the success of the brand,” Alexander says. “And with ADRs getting towards the upper $70s, they’re liking the ability to have an economy brand that delivers midscale results.”

PLUS+ properties are typically located in higher ADR markets— Raleigh, San Antonio, Austin, Atlanta, Baltimore, Philadelphia, and Pittsburgh, to name a few. The company continues to expand nationwide and internationally—it opened its first PLUS+ property in Japan last summer.

Aside from PLUS+, Red Roof’s big push is for “Fast. Free. Verified. WiFi.” Through the program, an independent third-party is commissioned to confirm that WiFi is capable of in-room video streaming for every guest concurrently. A total of 120 Red Roof properties are verified under the program. The company moved to implement a verified WiFi after guest surveys showed a strong preference for free, working WiFi over other amenities, such as a free breakfast. Alexander adds, “That’s how we look at everything we do—we test, see if the guests truly want it, then we move forward assuming they do.”