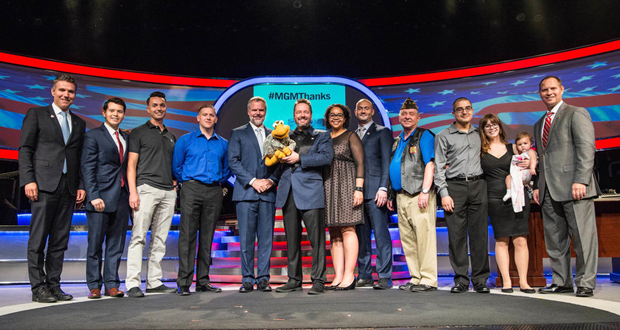 “As a company, we have always supported our country’s greatest heroes,” said Jim Murren, chairman and CEO of MGM Resorts International. “Our new Military & Veterans Program provides us with another channel to recognize and thank them for their service. Including spouses in our program allows us to honor these important partners as well for their incredible bravery and commitment to family and country. I am proud of our Veterans Employee Network Group for their work on this program, which will result in more meaningful on-property interactions between our team and the military community.”

At a launch ceremony at The Mirage Hotel & Casino, Murren presented the first MVP cards to seven active and retired military service members as well as military spouses. In addition to M life Rewards’ existing benefits, new Military & Veterans Program cardholders are automatically upgraded to the second Tier Level, Pearl, with benefits including complimentary self-parking at MGM Resorts properties as well as exclusive discounts on select entertainment, dining options, attractions, spa treatments, and room rate discounts at all U.S. MGM Resorts. The MGM Resorts Military & Veterans Program is available to all U.S. active duty, guard, reserve, retired military, veterans, and spouses of eligible military personnel. Those with a military ID can sign up for the program on-site at U.S. MGM Resorts destinations.

MGM Resorts supports the military through various programs and events each year, including:
Salute to The Troops, an annual appreciation weekend hosted at The Mirage created to show gratitude for wounded warriors and their spouses; Boots to Business, an industry-leading hiring program that recruits qualified military veterans and military spouses (MGM Resorts hired 648 veterans in 2016 and 202 veterans in 2017); Veterans Career Fair, an annual career fair for veterans and military spouses that has been taking place since 2012 (this year’s career fair on June 30 had more than 250 attendees and over 50 on-the-spot job offers); and active duty full pay and benefits, which offers full pay and benefits to eligible employees who are called to active duty. Employees who take a military leave of absence also receive full medical and dental benefits coverage during their deployment.