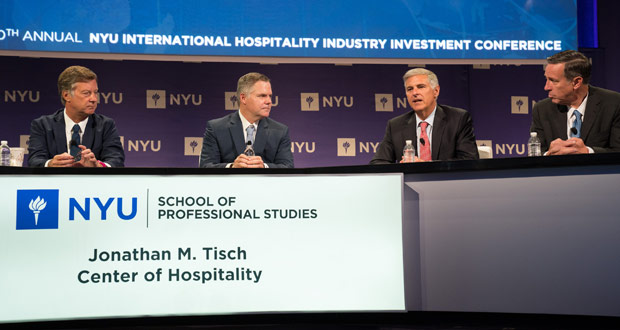 The cautious optimism of 2017 remains steady among hospitality industry professionals a year later during the 40th NYU Hospitality Investment Conference taking place at the New York Marriott Marquis from June 3-5. A strong first quarter, in which U.S. hotels reported better-than-expected RevPAR increases, record travel numbers, and the extended lodging cycle have boosted confidence levels even as tech disruptors and macroeconomic trends continue to keep hospitality leaders up at night. Much of the conversation during the conference’s first day focused on attracting international visitors and competing for customers in today’s digital environment.

“There are many opportunities on the horizon, and that’s why I am very optimistic about the future. But with growth also comes many challenges,” Tisch said. “At this event exactly a year ago, there were warnings about a potential slowdown of international visitors coming to our country. Unfortunately, that concern has become all of our reality.” Despite a growing global travel market, Tisch explained that the United State’s share has fallen over the past few years. “That means we as a destination have missed out on almost 7.5 million visitors, $32 billion in spending, and the opportunity to create 100,000 more jobs,” he said.

During a panel discussion, Katherine Lugar, president and CEO of the American Hotel & Lodging Association (AHLA), said that when the United States does not capture its market share of inbound international travel, the impacts are felt far beyond hotels, affecting restaurants, retail, national attractions, and more. “Most importantly, people internationally are not coming to the United States and falling in love with our country,” Lugar said.

Attracting international travelers becomes even more critical as Chinese outbound tourism rises. The number of international trips taken by Chinese travelers is expected to reach 700 million over the next five years—up from about 150 million in 2017.

To make the United States a more competitive travel market and a welcoming destination, AHLA worked with the United States Travel Association to launch the Visit U.S. coalition earlier this year. As part of the effort, the coalition will call on the Administration to support Brand USA, which could lose funding by 2020. Though Congress extended the fees that fund the program earlier this year, those fees will be redirected from the program to the U.S. Treasury in 2020.

“There have been some recent challenges to the sheer existence of Brand USA,” Tisch told conference attendees. “Unless this situation is fixed, Brand USA could be out of business in two years.”

“The battle is never over,” he added. “When it comes to defending travel, our industry must remain diligent and we must work together.”

Hotel companies are fighting a battle on another front, according to Marriott CEO Arne Sorenson. “We are in a war for who owns the customer,” Sorenson said during a panel discussion featuring four hotel CEOs, adding that “digital empires” like Amazon, Google, and Facebook are seeking ways to monetize their relationships with customers. “How do we deliver value to those customers so that they know it’s in their interest to be our customers rather than a customer of the intermediary,” Sorenson asked.

Illegal short-term rentals through companies like Airbnb also remains an issue, but panelists at the conference noted that they were less concerned, especially as governments increasingly taking action to regulate short-term rentals.

“We all have to play by a common set of rules,” Chris Nassetta, president and CEO of Hilton, said, explaining that new technology companies, especially those in the sharing economy, often compete against companies that following existing regulations without abiding by those same rules. “Now you’re starting to see governments and municipalities around the world catch up with that.”

One area that hasn’t changed over the past year is the industry’s focus on creating experiences for customers that drive loyalty.

“The name of the game is retention,” said Sébastien M. Bazin, chairman and CEO of AccorHotels during the CEO panel discussion. The high cost of acquiring new customers underlines the importance of understanding precisely what the customer wants and delivering that.

“People want to travel more and have more experiences. We’re all in the fulfillment business,” Nassetta said. “We need to, as an industry, double down on fulfillment—on having the best, high-quality experiences, products, and services.”