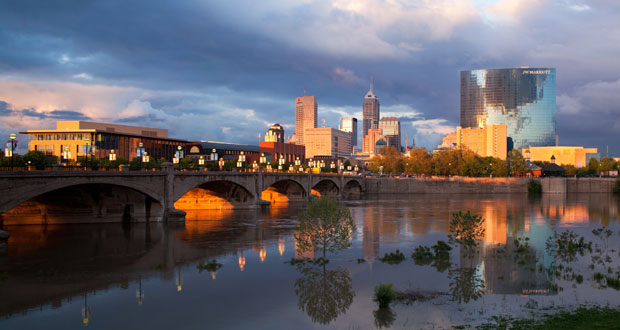 INDIANAPOLIS–Visitors to Indianapolis have boosted the region’s economy with record spending for six consecutive years, according to research conducted by Rockport Analytics on behalf of Visit Indy, Indianapolis’ official destination marketing organization (DMO). A record 28.6 million visitors added $5.2 billion in economic impact into the city’s economy in 2016, the most recent full year data available.

“With record-setting growth and continued development, Indianapolis is well positioned to be the best in the country for meetings, conventions, and major events,” says Mayor Joe Hogsett. “Our city’s vibrant culture, unique neighborhoods, and critically acclaimed culinary, arts, and entertainment venues make Indy a one-of-a-kind destination. And thanks to the 80,000 hospitality employees who go above and beyond to deliver our city’s signature hospitality, Indianapolis is a place people want to keep coming back to.”

“Indy is on an unprecedented run of convention, sports, and tourism success, going back to the Indiana Convention Center expansion in 2011 and the Super Bowl in 2012,” says Leonard Hoops, president and CEO of Visit Indy. “We’ve become a 12-months-a-year travel destination, topping $5 billion in visitor economic impact for the first time. And we’re confident through our ongoing regional tourism master plan efforts, and our track record of steadfast support from elected and civic leaders over the past four decades, that our best is yet to come.”

In 2017, the DMO collaborated with the Indiana Sports Corp, Pacers Sports & Entertainment, Indianapolis Colts, and others to win the NBA All-Star Weekend (2021) and the College Football National Championship (2022). The city also secured first-time bookings from the American Society for Microbiology (2018), American Wind Energy Association (2021), Fraternal Order of Police Grand Lodge (2021), and Association for Professionals in Infection Control and Epidemiology (2022) extended Gen Con’s convention in Indy to 2022. In addition, the city’s DMO is working with the Indianapolis International Airport, the Indiana Economic Development Corp., and others to help secure the state’s first transatlantic non-stop flight, an Indy-to-Paris connection on Delta beginning in May 2018.

Navigating the Hospitality Industry as a First-Time Investor

Dorothy Dowling on Paths To Joy and Success

Global Travel Pricing To Slow Down in 2020; Hotels To Rise 1.3 Percent