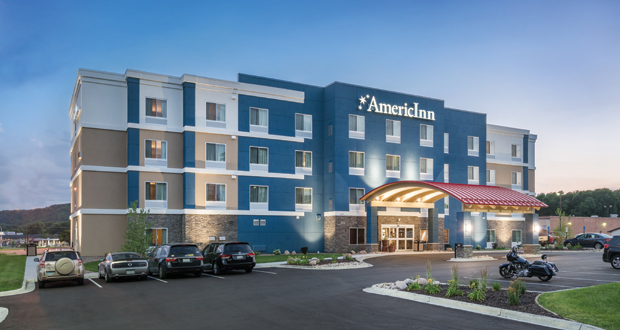 As the old adage goes, patience is a virtue—a virtue that Wyndham Hotel Group exhibited in the acquisition of the Minnesota-based AmericInn brand—one of the biggest hospitality deals of 2017. In October, Wyndham closed a deal that was nearly a decade in the making, purchasing the midscale brand from Northcott Hospitality.

With the acquisition, Wyndham added 200 hotels and a 20th flag to the company’s rapidly growing portfolio, as well as Three Rivers Hospitality, Northcott’s hotel management company. Wyndham first pursued such a deal eight years ago, but Northcott wasn’t yet ready to sell.

The acquisition was announced during a conference call in July. On that call, Paul Kirwin, Northcott’s president and CEO, introduced Wyndham’s president and CEO, Geoff Ballotti, to more than 100 AmericInn owners and franchisees. “The owners want to know, most importantly, how this acquisition will affect their day-to-day operations and bottom lines,” Ballotti says. “For a hotel chain with the negotiating power and leverage of 200 hotels to be joining a company with 8,100 hotels, from a distribution standpoint, that impact is very significant.”

AmericInn was a smart acquisition for Wyndham, as the brand captures a market that other Wyndham brands do not, especially in the Midwest. Wyndham was looking for developers who had a background and experience in the area; AmericInn adds those relationships to the Wyndham portfolio. Ballotti says, “It really fills a gap for us in the midscale segment in the upper Midwest. We need folks who are powerhouses in the region on our side. It also gives us a great footprint to grow from and access to some great owners and developers who we have not grown with before.”

Ballotti also notes that AmericInn hotels have a well-regarded brand known for consistent quality. “It’s really a strong, clean, well-run brand with a great service ethos and culture,” he says.

AmericInn’s systems are being integrated into Wyndham’s massive hospitality engine, including AmericInn’s loyalty program, Easy Rewards. AmericInn loyalty members will be able to transfer their points into the Wyndham Rewards program, and they will have the opportunity to earn and redeem points at Wyndham-branded properties in early 2018.

From Wyndham’s perspective, the company has obtained a brand with high ratings and many returning customers. According to Ballotti, “Over 85 percent of AmericInn’s 200 hotels are rated either Four Stars or above in their Trip-
Advisor ratings. We’re certain that they’ll score equally high in our guest satisfaction and net promoter scores.”

AmericInn is the 20th brand to join the Wyndham portfolio, following the soft brand the company launched in June, the Trademark Hotel Collection. And now, the future of AmericInn as part of the Wyndham family looks extremely bright. Ballotti says, “We’re very excited. And we think that AmericInn’s franchisees are going to be really excited about what we can add to their businesses.”

In April, FelCor Lodging Trust Incorporated merged with RLJ Lodging Trust, together creating a lodging REIT worth $7 billion, which, at the time of the merger, made them the third largest REIT by enterprise value. Now, the FelCor/RLJ portfolio encompasses 160 hotels across 26 states, including Washington D.C., amounting to 31,467 hotel rooms and includes properties with Marriott, Hilton, Hyatt, and Wyndham flags.

Following an all-stock, wholly owned transaction. FelCor is now a subsidiary of RLJ. Eliminating duplicate corporate positions and administrative costs has saved the company a total of $22 million, and they expect long-term benefits to include property level savings in utility energy, insurance, and furniture and fixture procurement. Following the merger, the REITs’ RevPAR immediately increased by 5.4 percent, to the amount of $137 million.

Both FelCor and RLJ are excited about the long-term effects of the merger. FelCor has seen better streamlining of operational structures, as well as sustainable portfolio growth that will likely continue long-term. While RLJ is excited for the same reasons, they have also expanded their geographic span.

In September, Kemmons Wilson Companies (KWC) announced that it will merge its hotel management operations—the company’s wholly-owned subsidiary, Wilson Hotel Management, LLC—with Valor Hospitality Partners, a management company with offices in Atlanta, Ga., the U.K., and Cape Town South Africa. As a part of the deal, KWC made a substantial investment in the combined entity, which is expected to accelerate Valor’s growth in the hospitality marketplace.

According to Euan McGlashan, co-founder and managing partner of Valor, the merger has been smooth and seamless. “We’re incredibly proud of the association. They were looking for many years for a group that they felt matched their values, culture, work ethic, passion, enthusiasm, and integrity, and that’s very hard to find today,” McGlashan says.

Experiencing some hiccups along the way is common for mergers—the visions of one group may not match another. That didn’t happen for Valor and KWC; both companies had the same vision from the start. McGlashan himself and other Valor executives have been working with the Wilson family for over a year, and have worked hard to ensure they are aligned on major issues. McGlashan adds, “The transition’s been incredibly smooth, and they’re the most wonderful group to work with.”

Valor’s hotels stretch globally to Europe, Asia, and the United States. By folding in KWC’s management company, Valor adds five managed KWC properties to their portfolio. McGlashan says, “It’s a true win-win. They’ve done a lot of due diligence on us, loved our reputation, our history, our executives, and what we’ve done as a company. And we love their history and what they stand for culturally and commercially.”

KWC’s history dates back to 1952, and has since conceptualized brands and franchises like Holiday Inn. Valor is currently looking towards accelerating growth primarily in the U.S. but also globally for hotels wanting a full-service platform with a driven management team.