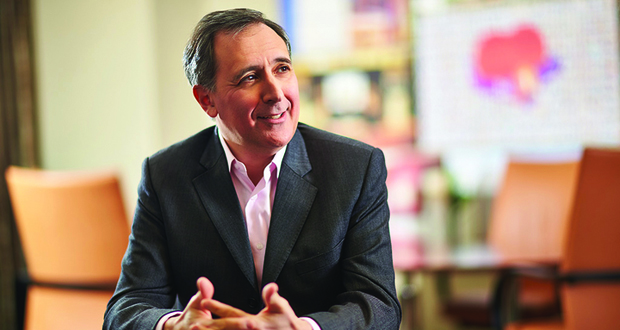 InterContinental Hotels Group (IHG) today announced that Richard Solomons has decided to retire from IHG and his role as CEO. Richard will step down as CEO on June 30 and retire from IHG on August 30. He will be succeeded by Keith Barr, a member of the group’s executive committee who has spent nearly 17 years with IHG, most recently as chief commercial officer. Keith will take up his new position and become a member of IHG’s board on July 1, 2017.

Richard joined the group 25 years ago and has been on the IHG Board for 14 years, including the last six as CEO. He has led IHG’s strategy and played an integral role in IHG’s successes since its demerger from Six Continents plc in 2003. As a board director and CEO, he has led the growth of IHG’s footprint around the world and established the business on a global scale.

Keith joined IHG in 2000 and has held senior leadership positions in the Americas, Asia, Middle East and Africa and Greater China regions, including four years as CEO of IHG’s Greater China business. He was appointed Chief Commercial Officer in May 2013, and has held global responsibility for IHG’s sales, marketing, and loyalty functions.

Patrick Cescau, IHG chairman, comments: “It has been a pleasure to work with Richard, and on behalf of the Board and our colleagues I want to thank him for his successful leadership of IHG. Richard has been an outstanding CEO and a driving force behind IHG becoming the leading global organisation it is today. He has created exceptional shareholder value and as CFO successfully steered the group through the financial crisis. He has executed our winning strategy with a sharp focus on developing our brands, guest experience and loyalty proposition, as well as the digital transformation of the business. Although we are sorry to see him go, we respect and understand his decision to retire and wish him all the very best for the future.”

“Succession planning and talent development is an important part of IHG’s culture and is built into the way we run the business,” Cescau continues. “Keith’s appointment is a result of a rigorous process. He has had a significant career in the hospitality industry and has the leadership skills and operational experience to take on the role of CEO. His time running and transforming our Greater China business, as well as his recent leadership of IHG’s sales and marketing functions, means he is extremely well placed to lead the business through the next stage of its development.”

Richard Solomons comments: “It has been a privilege to have spent the last 25 years working in such a dynamic business and alongside an outstanding executive team, talented colleagues across the business and our dedicated hotel owners. I am proud of the success we have achieved since IHG became a standalone business in 2003, not least completing our transition to becoming an asset-light business, launching a series of innovative new hotel brands and new concepts for our heritage brands, acquiring Kimpton Hotels & Restaurants, and creating value for shareholders. Keith has been an outstanding leader in the business and is clearly the right person to lead IHG to continued future success.”

Keith Barr comments: “I am honored to be appointed CEO of one of the world’s leading hotel companies and to have the opportunity to lead IHG. Building on Richard’s leadership and IHG’s strong performance track record, we will continue to focus on developing our portfolio of brands, delivering consistent, high-quality growth and creating value.”