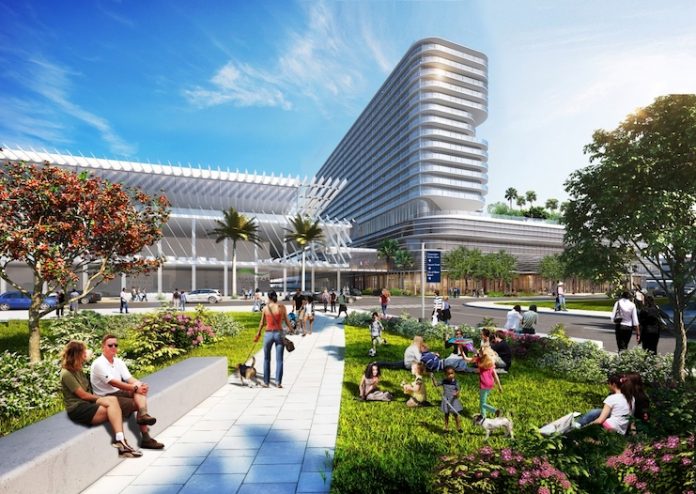 David Martin of Terra and Jackie Soffer of Turnberry are leading the development of the 17-story hotel at the intersection of 17th Street and Convention Center Drive. The propery is within walking distance of the beachfront, Lincoln Road Mall, New World Symphony, The Bass Museum, and The Fillmore Miami Beach.

“For years, Miami Beach has served as a global destination for arts, culture, shopping, dining, and entertainment, but the City has lacked a true headquarters hotel for top-tier conventions and meetings,” said Martin and Soffer. “South Florida’s first Grand Hyatt hotel will maximize Miami Beach’s investment in its re-imagined Convention Center while bridging the physical gap that exists between the Convention Center District and surrounding neighborhoods.”

The new hotel will become the second Grand Hyatt property in Florida, joining Grand Hyatt Tampa Bay. Hallmarks of the brand include bold and vibrant design and architecture, elevated amenities, and welcoming service.

“At Hyatt, we believe in growing with intent and expanding our footprint in markets that matter most to our guests and World of Hyatt members,” said David Tarr, senior vice president, development, Americas, Hyatt. “Hyatt is proud to play an integral role in this project as hotel operator, under the luxury Grand Hyatt brand, which will help guests and locals alike celebrate the iconic, captivating city of Miami Beach.”

Grand Hyatt Miami Beach will be designed by architect Bernardo Fort-Brescia and his firm, Miami-based Arquitectonica. The team also includes partner Craig Robins of Dacra, who is the visionary behind the Miami Design District and helped revive Miami Beach’s Art Deco District in the 1990s; Stonehill Taylor, which is designing the hotel’s interior lobby, lounges, ballroom, meeting rooms, hotel rooms, and all common areas; EOA, which is designing the pool deck hospitality features of the hotel; and Arquitectonica GEO, which is creating pedestrian promenades and landscapes.

The hotel is expected to include 12 floors of guestrooms with views of Miami Beach, two floors of meeting spaces and ballrooms that will complement the Convention Center, a resort-style pool deck with panoramic views, and limited retail space that will activate the district at street level. An elevated skybridge will enable event attendees to move freely between the hotel and Convention Center in a climate-controlled, art-filled corridor.

Plans also include landscaped pedestrian promenades on surrounding streets, bike-sharing stations, connectivity with public transit routes, dedicated ridesharing pick-up and drop-off zones, and direct access between the Convention Center and Lincoln Road. The project’s resiliency and sustainability measures include stormwater management and reuse, flood risk mitigation, and the use of solar power—all of which are designed to ensure operational continuity during weather events.

“The Greater Miami Convention & Visitors Bureau (GMCVB) joins Terra, Turnberry, and The City of Miami Beach in welcoming the Grand Hyatt Miami Beach as the newly named brand for the 800-room headquarter hotel connected to the Miami Beach Convention Center,” said William D. Talbert, III, CDME, president of the GMCVB. “Grand Hyatt Miami Beach makes it possible to better compete for citywide conventions which fuel jobs in our community and generates business for all of Greater Miami’s hotels and merchants. We look forward to the hotel ground-breaking which once completed will finalize the Miami Beach Convention Center District.”