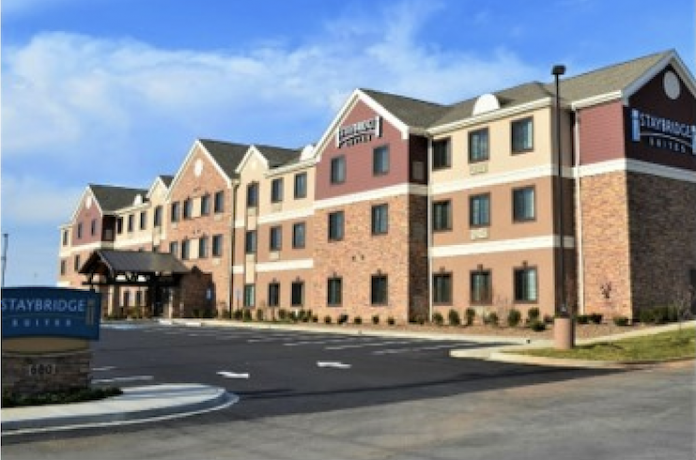 DENVER and SAN DIEGO—HREC Capital Markets Group, the capital markets team within HREC Investment Advisors, announced it has arranged a $10.25 million financing of the 124-room Staybridge Suites and $5.5 million financing of the 108-room Hyatt Place, both located in Bowling Green, Kentucky. The negotiations were led by Greg Porter, senior vice president, and Mike Armstrong, principal and head of capital markets.

The Staybridge Suites was financed by a major CMBS lender with a fixed-rate, non-recourse loan featuring a 10-year term, twelve-month interest only period and 30-year amortization thereafter, at a rate of 4.05 percent, and loan to value of 66 percent. The Hyatt Place was financed by a national non-bank lender with a loan featuring a 3-year term with two 1-year extension options, 24-months interest only, and 25-year amortization thereafter, an as-is loan to value of 75 percent, and recourse provisions which burn off on achievement of certain performance hurdles.

“In this environment, many banks are shedding hotel loans by way of non-renewals, regardless of the quality and performance of the asset or strength of sponsorship,” commented Porter. “These hotels exhibit excellent ownership and management, and we are pleased to have identified lenders that give credit where credit is due.”

“Our Capital Markets and Mortgage Brokerage team leverages HREC’s comprehensive network of national, regional, and local hotel lenders to provide a thorough loan selection process to ensure the most competitive terms and successful execution for our borrower clients,” added Armstrong.

Bowling Green is Kentucky’s third largest city, behind Louisville and Lexington, and is the county seat of Warren County. Bowling Green has an estimated population of 70,500 and its MSA has an estimated population of 233,560. Commonwealth Health Corporation, Western Kentucky University, and Warren County Board of Education are the biggest employers in Bowling Green and the surrounding region. Additionally, Bowling Green is known for its numerous manufactures, including General Motors and Fruit of the Loom. The General Motors Bowling Green Assembly Plant specializes in assembling GM’s Y-body sports cars, the Chevrolet Corvette, and formerly the Cadillac XLR. The assembly plant is 1.7 million square feet, situated on 212 acres, employing over 1,500, and is the only plant in the world designated to build Corvettes. Bowling Green is also home to Western Kentucky University, the second-largest public university in the state. Western Kentucky University’s campus spans over 200 acres and enrolls approximately 20,000 students. The university has 14 division-one sports programs, with the school’s most reputable sports being football and basketball.