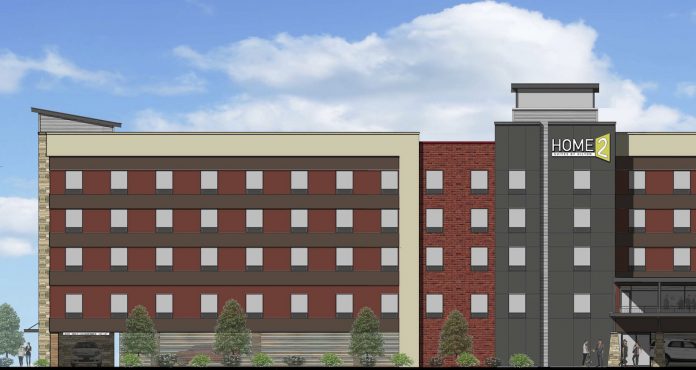 Asheville, N.C.—Aston Properties has sold a two-acre site at Biltmore Station in Asheville, N.C., for the development of a new four-story hotel and mixed-use retail and office space. Baywood Hotels, a Maryland-based hospitality management company, plans to start construction during the fourth quarter on a 120-room Home2 Suites by Hilton. Designed for cost-conscious travelers, the all-suite, extended-stay hotel is expected to open at Biltmore Station during the first quarter of 2019.

“Baywood Hotels is a best-in-class hospitality firm, and the addition of a new hotel will further enhance Biltmore Station as a walkable, pedestrian-friendly center where residents, employees and guests can work, shop, dine and stay,” said Jamie Kneisel, director of acquisitions and dispositions at Aston Properties.

Charlotte-based Aston Properties acquired Biltmore Station in early 2015. Located on Hendersonville Road in historic Biltmore Village and across from Biltmore Estate, the 101,000-square-foot center was less than 50 percent occupied at the time of the acquisition. Since then, Aston Properties has overseen a $1.5 million makeover at the property, including new building facades, new landscaping and lighting and the addition of 100 parking spaces. Working with Asheville-based Dewey Property Advisors, the firm has also signed several new, notable tenants including The Biltmore Company (13,000 square feet) and Image Dental Arts (11,345 square feet).

New retailers and restaurants at Biltmore Station include Pour Taproom, which opened in January and Italian wine bar Virgola, which opened in July. Pour Taproom offers 56 craft beers, ciders, and wines that customers can purchase on a by-the-ounce basis as well as a full food menu with local ingredients. Virgola has an Italian wine list and menu items including fresh oysters, ceviche, caviar, and salumi.

“When we purchased the property, we saw the potential of Biltmore Station’s unparalleled site, and it’s exciting to see our plan come to fruition,” added Kneisel. With the execution of a pending lease, Biltmore Station’s occupancy will approach 90 percent.