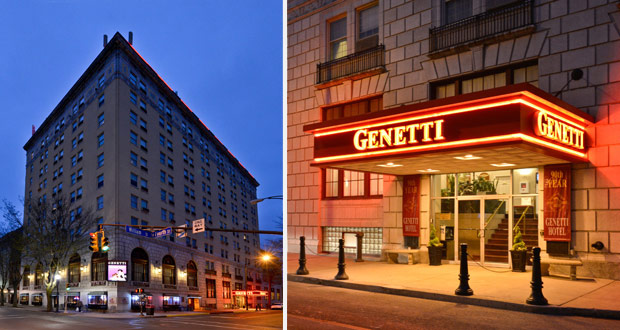 Built in 1921, Genetti Hotel & Suites in Williamsport, Pennsylvania, is a 208-room, historic, full-service hotel. When Best Western announced it was accepting applications for SureStay, the hotel jumped at the prospect, says Marc Schefsky, the property’s general manager. “We were all over it. For the past 20 years, we had been struggling to compete with properties that offered a strong brand identity, and the rewards programs and support that came with it.” The hotel signed a contract immediately following Best Western’s 2016 conference, becoming the first SureStay Collection Hotel. Schefsky spoke with LODGING about the process of becoming a SureStay property and the impact it’s had on Genetti Hotel & Suites.

Why wasn’t renovating and pursuing a traditional brand an option for this property?

Well, first, we wouldn’t want to compromise the existing identity of this historic hotel. Additionally, it is built in the old European parlor style. Our rooms are very, very unique, and, frankly, it would have been impossible to conform to a brand standard. We also wanted to keep that feel of family-owned independence and not have to change our stripes. We didn’t have to change our stripes at all, and that was a very attractive prospect.

What changes did you have to make to join the brand?

Best Western had to come and do a quality assessment, and we had to agree in our contracts to do some very simple improvements. I cannot stress enough how simple they were; for example, we had to put carbon monoxide detectors in every room and had to increase our towel weights.

Maintaining a certain score on TripAdvisor is a requirement for remaining a part of the SureStay Collection. Is that at all nerve-wracking?

A bit. At first, we were a little concerned that being a part of a collection would elevate guest expectations to a level that we couldn’t meet. But that hasn’t been the case. We’ve been a SureStay property for about a year now and our TripAdvisor score has consistently been 4.5, which is well above the necessary threshold. We do occasionally get a one-off negative review, but I think some of that is just people who don’t really understand that we’re a unique historic hotel. They come in expecting cookie cutter, current decor, and that’s just not us. We are exactly the opposite of that. Every one of our rooms is very different; there’s different furniture in a lot of our rooms, different art, and very classic style. Luckily those one-off reviews are rare and are trumped by many, many, many more positive reviews.

What would you say to a hotelier considering converting his or her property to a SureStay?

I’ve fielded several calls over the last year from hoteliers who were considering entering the brand. Some of them are conversions from other brands, some of them are conversions from Best Western hotels, and some of them are independents like us. I’ve been able to tell them with great confidence that the process of joining the brand was very easy. We saw the benefits immediately, especially as an independent property that previously had to negotiate with OTAs one-on-one. We were paying a lot more in commission fees because we didn’t have the buying power of a major brand behind us. When we signed on for SureStay, our commission fees became flat and were negotiated by Best Western. We also are benefiting from the support from the international sales team.

I’ll also say that as an independent hotel, it was a great opportunity to access the perks of a big brand without having to change what sets us apart. That’s absolutely one of the reasons that Best Western came up with this brand—they wanted to keep unique hotels within the family, and SureStay is a great way to accomplish that.