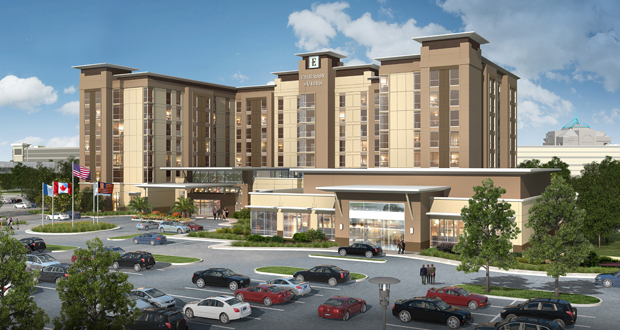 MCLEAN, Va.—Hilton’s all-suites brands—Embassy Suites, Homewood Suites, and Home2 Suites—broke another growth record in the third and fourth quarters of 2017. Altogether, the brands averaged a new property opening every three days last year, culminating in a footprint of 900 opened hotels and a combined pipeline of more than 550 pending locations. Collectively, the All Suites Brands by Hilton are on pace to reach 1,000 opened hotels before the end of 2019.

Opening more than 75 new hotels in the second half of the year expanded Hilton’s all-suites footprint into locations ranging from Kapolei, Hawaii to Charleston, S.C. The company also says that those openings demonstrate the versatility of the Embassy Suites, Homewood Suites, and Home2 Suites building models, which has allowed the brands to expand beyond U.S. suburban markets to hotel products in high-demand in urban, ‘surban’, resort, and international destinations.

In addition, the all-suites brands bolstered a pipeline of more than 173 new signed deals in 2017. Once these pending properties have opened, the Hilton’s all-suites footprint will extend throughout the United States, Canada, Mexico, the Caribbean, Central and South America, Asia, and the Middle East.

Embassy Suites is in the midst of two brand-wide refreshes designed to increase profitability and enhance the offerings at existing and new hotels, which includes the evolution of its F&B program. Additionally, another 45 hotels are expected to complete an Atrium Refresh, the brand’s renovation program which focuses on turning signature atriums into intimate social lobbies. Between new openings and the nearly 110 hotels that will have completed an Atrium Refresh, by the end of 2019 more than 70 percent of Embassy Suites properties will have a modern interior that is less than six years old.

U.S. openings, international projects, and a new prototype that allows for up to 80 percent studio suites propelled the brand to its 450th property opening at the end of 2017. In addition, more than 190 legacy Homewood properties completed a renovation through the brand’s “Take Flight” program.

Home2 opened its 200th hotel at the close of 2017 and is expected to open its 300th property by early 2019. In the second half of last year, Home2 Suites by Hilton Birmingham Downtown opened as an urban hotel and the brand’s first dual-build with Hilton Garden Inn. Another property of note that opened in the second half of last year is the Home2 Suites by Hilton Murfreesboro—a dual-brand hotel with Tru by Hilton. The Murfreesboro property is the first of more than 15 pending multi-brand properties currently in the pipeline that pair the Home2 and Tru brands.